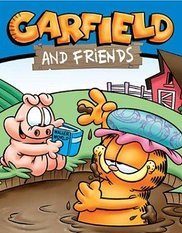 A title that consists of the main character's name with "And Friends" or some variationnote e.g. "and company", "and his friends", "and pals", etc. attached to the end of it. This is commonly justified, as these type of shows are often adapted from more than one franchise (Garfield and Friends having Garfield and U.S. Acres, for example).

This is extremely common in children's shows and sitcoms, the latter usually being the Syndication Title.

A Sub-Trope of Character Title. May also sometimes overlap with Spotlight-Stealing Title. See also Artist and the Band.

There are 163 movies, TV shows, and episode titles with "and friends" in the title

Not to be confused with My Friends... and Zoidberg, which despite the name, is unrelated.