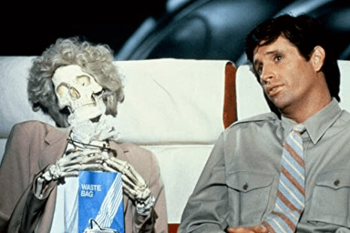 "I know I'm probably starting to bore you..."
"YOU WASTE OF AIR. I feel like I wasted a gallon of oxygen just talking to you. Starving children could have used that oxygen you know. NOW THEY'RE DEAD!"
— Neckbeard, Frumplequest
Advertisement:

This is a person whose conversation is so dull, you would rather watch paint dry for an hour than listen to them for a minute. The Bore may not be talkative—perhaps they just have the charisma of a wooden plank, saying nothing and doing nothing of interest. They're probably an enthusiast for Incredibly Lame Fun and take a keen interest in, say, the history of toothpaste caps. Perhaps they do have interesting stories but tell them so often or in such a way as to suck all interest out of them. Perhaps whenever they join a conversation, no matter what the subject, they can only talk about how it affects or relates to them. Whichever it is, The Bore is unutterably, interminably dull.

Usually, they are completely oblivious to the agony they cause, and often they're too nice for anyone in the cast to want to hurt their feelings, although this isn't always so. Some of them are aware of how uninteresting everyone else finds them and simply don't care, or they'll exploit the rules of common etiquette or a position of authority to "enlighten" their victims with their droning. In any case, getting into a conversation with them is like getting caught in Hollywood-style quicksand: unless someone or something interrupts, you won't be able to escape being sucked down into a bottomless pit of monotony.

Maybe a source of Nap-Inducing Speak. Compare No Sense of Humor. Not related to The Comically Serious, where a boring person gets laughs by having funny things happen to her while she reacts completely seriously. Super trope to Old Windbag, a kind of Bore who is old (usually) and known for telling really long, uninteresting stories. Also a super trope to Windbag Politician, a politician who bores the audience half to death with long, usually low-substance speeches.

A sub-trope of Indubitably Uninteresting Individual. Contrast with Fun Personified and Genki Girl whose overall energetic and fun demeanor is likely to be pointed out by people around them.

In-Universe Examples Only, please. This is about other characters finding someone boring, not audience members.