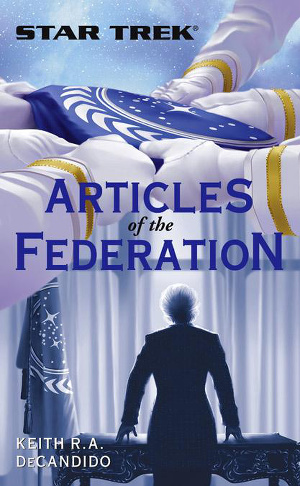 A book in the Star Trek Novel Verse, notable for its in-depth look at the internal politics of The Federation. Featuring Ensemble Dark Horse character President Nanietta Bacco and her cabinet, the novel has a great many subtle links to the rest of the novel 'verse while remaining entirely readable on its own terms.
Advertisement:

Following the surprise resignation of Federation President Min Zife after the disastrous Tezwa affair, Nan Bacco of Cestus III has won a hotly contested election to become the new chief executive of over one hundred fifty planetary civilizations and their colonies. But no sooner does she take office than the Romulan Star Empire falls into chaos. With tensions already high, a Reman refugee ship is sighted approaching a Federation outpost, its intentions unknown. As the first year of the Bacco Administration unfolds, the Federation Council is slow to work with its new president, and not always supportive of her policies or her appointments to key council positions; a successful first contact suddenly becomes a diplomatic disaster; and the sins of President Zife prove difficult to lay to rest...as one celebrated Starfleet officer's career reaches a turning point.
Advertisement: