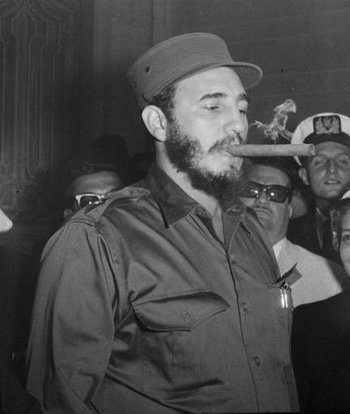 El Comandante, 1959
"I began revolution with 82 men. If I had to do it again, I would do it with 10 or 15 and absolute faith. It does not matter how small you are if you have faith and plan of action."
— Fidel Castro
Advertisement:

Fidel Alejandro Castro Ruz (August 13, 1926 – November 25, 2016) was born to a peasant and conscript from Spain who became a sugar plantation owner in Cuba. Fidel Castro involved himself in revolutionary politics during his days as a law student in Havana. He participated in the attempt to overthrow the Dominican dictator Rafael Trujillo in 1947, as well as the first, unsuccessful attempt to overthrow Fulgencio Batista, the dictator of Cuba. He then fled to Mexico, where he met Che Guevara. Gathering Che, Camilo Cienfuegos

, and other like-minded Cubans, Castro formed the left-wing nationalist 26th of July Movement

or M-26-7. After sailing back to Cuba in 1956, Castro and M-26-7 waged a furious insurrection in the cities and countryside against Batista, finally managing to topple the dictator in 1959, in what has become known as the Cuban Revolution

. Castro became a celebrity and toured America to much acclaim.

Contrary to popular belief, Castro appeared to be genuinely keen on democracy and was effectively a left-wing nationalist during the revolution, and only later found the direction for his own nationalism in communism. He started his political career off as a radical social democrat working for the like-minded populist Ortodox Party

(many 'Ortodoxos' later joined M-26 -7's ranks), and promising a democratic Cuba with the restoration of the famous 1940 Constitution. After his victory on January 1st, 1959, Castro began getting interested in communism when he met with Cuban communists - who had previously scorned him as a bourgeois hipster all throughout the revolution - to form a working left-wing government. Worsening relations with America over nationalization of American business properties in Cuba, and an embargo by the Eisenhower administration led Castro to begin looking towards the Soviet Union for support, destroying the revolutionary alliance as he exiled or imprisoned anyone who was opposed to the now pro-Soviet direction of the revolution. But it took the Bay of Pigs Invasion in 1961 for Castro to officially declare himself and the revolution communist.note  From then on, he was very insistent that he had always been a communist from a young age, despite plenty of evidence to the contrary. He then set up a communist state with himself as the Glorious Leadernote He held his post-1959 position as Prime Minister for many years despite Cuba remaining a presidential republic. Only in 1976, when a new communist constitution was drafted, did Castro become president. transformed Cuba into an authoritarian one party state under Marxism-Leninism, and ruled the country as dictator until 2008, when he officially stepped down due to ill health. He was succeeded by his much quieter younger brother, Raúl (who has been second-in-command for decades). But until his death, Castro was the face of Cuba, and his left-wing nationalism (now taken in a communist direction) ensured that he had the respect of the Cuban populace, even those who privately disagreed with the communist system. Both his admirers and actual supporters alike are known as Fidelistas in Spanish, and Castrists in English.

Naturally, Castro quickly became an enemy of the US. The CIA tried in various ways to get rid of Castro, including multiple assassination attempts (including some rather odd methods like exploding cigars), the Bay of Pigs Invasion on 1961, and an economic embargo since 1962 (this is still in effect, though Barack Obama has worked to lighten the restrictions—even allowing visitors to bring home 100 dollars' worth of Cuban cigars), he nevertheless survived. Castro was also excommunicated by Pope John XXIII, though his stance towards religion was far more moderate than other Communist nations, and Cuba notably was far less religious than other Latin American nations, due to the Catholic and Protestant churches generally being supportive of Spanish colonization and US economic domination respectively. The Cuban government actually began a careful rapprochement with the Church in the 1970s, and changed its constitution to declare the state a secular one as opposed to state atheism. This is a fact acknowledged when Pope John Paul II, a famous anti-communist icon visited Cuba under his tenure, and condemned the US Embargo. Years later, Pope Francis played

a role in brokering the US-Cuban Thaw.note Of course, Havana and Washington had been doing backchannel negotiations for many years in secret.

Castro was also a central figure in the Cuban Missile Crisis and he was the one player in the incident most ready to launch the missiles if the Americans dared invade (as well as mobilizing the entire army beforehand), only to be barely restrained by his Soviet partners. However, Castro only wanted to launch the missiles as an absolute last resort. Khrushchev also openly treated Cuba as a pawn in the whole matter despite previously buttering Cuba up as a trusted Soviet ally, and locked Cuba out of the negotiations, something Castro absolutely despised as a Cuban nationalist, and never forgave the Soviets for. As a result, Cuba aligned closer to the Non-Aligned Movement

than the Warsaw Pact afterwards, despite still being a Soviet ally. Through the Cold War, Cuba relied on Soviet support, and when that was cut off Cuba faced a major economic crisis (mostly due to a lack of oil). Later on, Castro admitted that he now regarded JFK as a Worthy Opponent and honorable man.

During the Cold War, Castro's regime heavily involved itself in anti-colonialist struggles in Africa. Cuba involved itself with liberation struggles in Mozambique, Namibia, Zaire (now the Democratic Republic of Congo), Guinea-Bissau, and Angola. Cuba's intervention in the Angolan War against Portugal was especially decisive, since it played a part in the end of the Portuguese empire and its transition to democracy, secured Angolan independence, as well as the independence of Namibia, and checked a potential invasion by Apartheid South Africa. Castro also provided much support and inspiration for Nelson Mandela and his African National Congress, and he dispatched doctors across Africa to provide aid to the poor. For these reasons, Castro and Cuba in general have a heroic reputation in Africa

, and Nelson Mandela considered Castro his friend and mentor

in Ethiopia, which was widely condemned for its cruelty, corruption, ineffective governance, and worsening an ongoing famine with its thuggish policies.

Castro also made some surprising and intriguing alliances with leaders supposedly at the opposite end of the political spectrum to him: the fascist Francisco Franco (despite Fidel's Republican sympathies, shared Galician heritage, mutual suspicion of the USA, similar social conservatism and dislike of Fulgencio Batista), the brutally anti-communist Argentine junta (Castro strongly supported what he saw as the 'anti-imperialist' invasion of the Malvinas) and the fundamentalist Ayatollah Khomeini (mutual suspicion of the US again, nations suffering from US sanctions, and coming to power via a popular revolution).

The blockade persisted throughout all aspects of Cuban life, and caused tremendous economic strain. Still, Castro managed to overcome these difficulties through a rigorous re-structuring of the country's planned economy. Cuba is now a major tourist destination for non-Americans (Americans are forbidden to go to the island by the US government, though many do nonetheless) and much of its economy is based around tourism. Cuba also had a long history of pursuing secret backchannel negotiations with the US to try and form some sort of detente throughout the Cold War and afterwards.

Although Cuba remains a poor country with very limited political and economic freedom, Castro's regime did much to improve public education, sports and particularly public health. Cuba still exports doctors to many Latin American countries and has an average life expectancy on par with your average first world country. On the other hand, a lot of basic living commodities are rationed, many buildings are in a poor state of repair, internet access is extremely limited, journalists are treated badly, press freedom is almost non-existent, and the human rights record of the government is poor, particularly regarding incarceration rates, as Castro was notoriously fond of short-term arbitrary detention in terrible prison conditions for all his critics, with bouts of psychological torture to boot. However, the human rights record has improved over the years albeit very slowly, and is at least significantly better than the average dictatorship nowadays.

Aside from the infamous executions of former officials and dissidents without trial at La Cabana prison (overseen by Che himself), the Castro regime has become infamous for homophobia in past decades, with homosexuals being thrown in labor camps immediately after the revolution while others were expelled from the country. That said, Castro did take personal responsibility, declaring that his attitude to LGBT rights was wrong in his autobiography, and outright declaring that he was wrong in his homophobia in 2010. The country does have a good rating on the sustainable development index

, though this likely has more to do with the poverty than conscious government policy (i.e. they waste little resources because many things are in short supply, and their living standards are low so they don't consume much anyway).

Not as much is known about Castro's personal life, but one of Castro's biographers, Leycester Coltman, described the Cuban as being "fiercely hard-working, dedicated, loyal... generous and magnanimous" but also noted that he could be "vindictive and unforgiving" at times. He went on to note that Castro "always had a keen sense of humor and could laugh at himself" but could equally be "a bad loser" who would act with "ferocious rage if he thought that he was being humiliated." There have been claims he had been with around 35,000 women, with his secret police allegedly recruiting many of them off Cuba's beaches. He was known as a cigar fan, but stopped smoking them on the advice of his doctors in 1985.

Castro was the author of many political books (most of them being edited collections of his speeches, of which there are many—Castro currently holds the record for the longest speech delivered at the United Nations General Assembly, at 4.5 hours), most of them dealing — as you'd expect — with his problems with capitalism and American foreign policy.

Castro died on November 25th, 2016, of unannounced causes. Ironically enough, his death on November 25 was Black Friday in America, a very consumerist capitalist holiday. It was also the birthday of far-right Chilean dictator Augusto Pinochet, leading to many jokes to the effect that Pinochet's birthday wish had finally been granted. On the less ironic note, he passed away on the very day that he and his comrades sailed to Cuba to begin the most important section of their revolution. November 25 was also the birthday of Armenian communist Monte Melkonian, funnily enough. There remains a small group of people who believe Castro had actually died months to years before the announcement, with it being withheld for various reasons depending on who you ask.