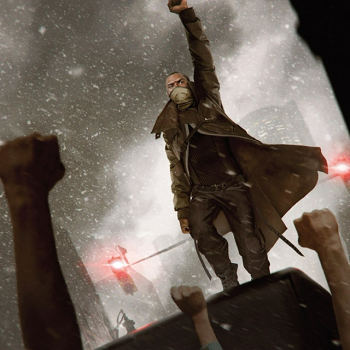 "WE... ARE... FREE!!"
"The more you tighten your grip, Tarkin, the more star systems will slip through your fingers."
— Princess Leia Organa, Star Wars: A New Hope
Advertisement:

It can be a cruel life in a typical fantasy story. The Evil Overlord’s new government has ruthlessly taken power, and The Empire rules the land with an iron fist and is slowly but steadily taking over the world. The people are oppressed and overtaxed, but the enemy is just too powerful for anyone to overcome. What can they do?

Never fear, the Rebel Leader is here! Swinging into action (sometimes literally) with their band of loyal followers, they lead the charge against evil and fight to free the people!

Almost every rebel group has one of these, a heroic and free-spirited person with rugged good looks and a perfect grin. Sometimes a series bucks the trend by having a Plucky Girl lead the rebels, or perhaps someone who was the legitimate ruler and is trying to get back their country.

However, in other series things may not be as they seem. Sometimes the rebel leader may make questionable choices in the fight against the empire, perhaps they're just using the rebel cause to further their own agenda, perhaps they're abusing the very people they're trying to help, or are willing to take down the enemy no matter what the cost. Sometimes the Rebel Leader will be just as bad as the Evil Overlord they’re trying to take down, often leading to Meet the New Boss should they take over. Occasionaly they will be the Big Bad rebelling against The Good King or a similarly peaceful government, in which case they are a Dark Messiah, a leader who is a very questionable 'savior'. Or perhaps they’re just a Doomed Moral Victor if the odds are really that bad.