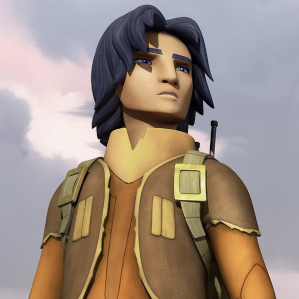 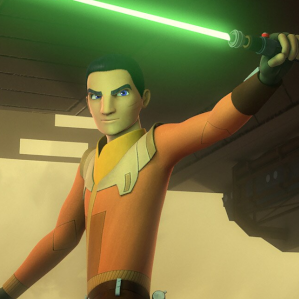 Voiced by: Taylor Gray
Voiced in Latin-American Spanish by: Memo Aponte
Voiced in Japanese by: Kenji Nojima
Advertisement:
Appearances: Adventures in Wild Space | Ezra's Gamble | Rebels | Rebels Magazine | Servants of the Empire | Kanan | Forces of Destiny | Adventures
"How we choose to fight is just as important as what we fight for."

A street smart con artist and small-time thief who joins the Ghost crew and learns the ways of the Force from Kanan. Left on the streets after his rebel parents were arrested when he was seven, Ezra continues their legacy in the Rebellion, fighting for his loved ones and those in need.

Ezra Bridger reveals the Rebel's base of operations to one of the Seventh Sister's ID9 seeker droids, which the Inquistor happily accepts...

Ezra Bridger reveals the Rebel's base of operations to one of the Seventh Sister's ID9 seeker droids, which the Inquistor happily accepts...