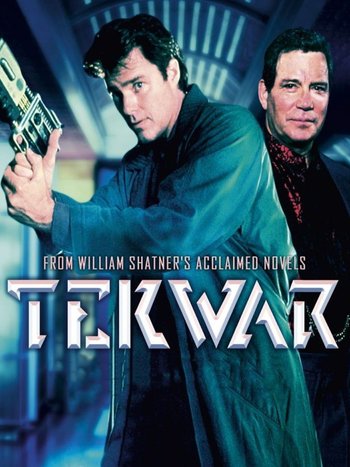 TekWar began as an idea of William Shatner’s. He turned to Ron Goulart, who took this idea and ghost-wrote nine novels. While those books were being published, TekWar was developed for television by Stephen Roloff and four made-for-TV films were created. The first three films, TekWar, TekLords and TekLab were adaptations of the first three novels, while the fourth film, TekJustice, was an original story. After those four films were made, the story continued as one eighteen episode television season. Sometimes the four films are regarded as Season 1, and the eighteen episodes are seen as Season 2. Other works related to TekWar include TekWorld, a comic book series, and William Shatner’s TekWar, a video game made by Capstone and released on the Build Engine.

The plot to the series is as follows: Police officer Jake Cardigan is framed for murder, and dealing in “Tek,” a highly addictive computer chip that alters the user’s perception of the world. Cardigan is sentenced to serve fifteen years in cryo-imprisonment. Four years into his sentence he is released by Walter Bascom (Shatner), head of Cosmos, a private security firm. He gives Cardigan the choice of either working for him, or going back to the freezer. Reluctantly, Cardigan agrees and begins his looking for one of Bascom’s missing scientists. One who was working on something that seems to have attracted the attention of the drug lords who make Tek.

The TekWar movies and TV series contain examples of the following tropes: