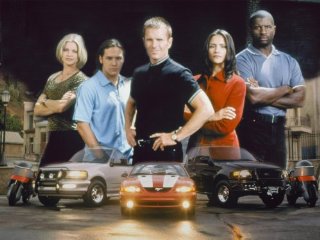 "Fifteen years ago, all it took was one man and one machine to get the job done. Now, the Foundation for Law and Government has assembled five highly skilled operatives and paired them with the most advanced, state-of-the-art vehicles to take on a new breed of outlaw. They are: Team Knight Rider."
Advertisement:

A short-lived Sequel Series to the original Knight Rider. It ran from October, 1997 to May, 1998, and a total of 22 episodes were produced in its single season. Rather than focusing on one man and his car, TKR featured a team of five operatives and vehicles:

The series was considered a failure on many levels. In addition to failing to draw much public interest, it (perhaps unfairly) alienated most fans, whose common complaints were:

So outraged were fans of the original series that it was widely speculated that TKR's producers were intentionally attempting to make a bad series as a personal slight against original series creator Glen Larson.

None of the original cast appeared in this series; Edward Mulhare was cast in a recurring guest role, but his untimely death made this impossible. The characters of KITT and Michael Knight made cameos in the series finale, but were played by stand ins.

TKR aired in syndication as part of the Action Pack (which also aired Hercules: The Legendary Journeys and Xena: Warrior Princess) in 1997.