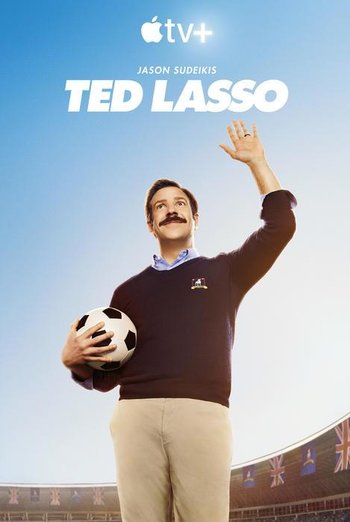 Out of his league.
"For me, success is not about the wins and losses. It's about helping these young fellas be the best versions of themselves, on and off the field. And it ain't always easy, but neither is growing up without someone believing in you."
— Ted Lasso
Advertisement:

The eponymous Ted Lasso is an American college football coach who is hired as the new manager of the fictional English Premier League soccer club AFC Richmond, despite having absolutely no experience with the beautiful game. Undaunted, he sets about bringing his unique style of coaching to the club and works to win over everyone he comes across.

The show was based on a series of adverts for NBC Sports' coverage of the Premier League, where Lasso instead coached Tottenham Hotspur. The series premiered on August 14, 2020. Before season 2 even began filming, Apple renewed the show for a third season; Bill Lawrence has indicated that the show will likely not continue past that point, due to Sudeikis's availability.