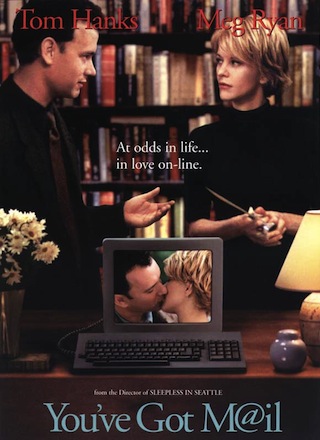 You've Got Mail is a 1998 romantic comedy featuring Tom Hanks and Meg Ryan in their third and final screen pairing (after Joe Versus the Volcano and Sleepless in Seattle). It was directed by Nora Ephron, who co-wrote the screenplay with her sister Delia. It's loosely based on Miklós Lászlo's theatrical play Parfumerie (which had previously been adapted into the 1940 film The Shop Around the Corner, the 1949 musical film In the Good Old Summertime, and the 1963 stage musical She Loves Me).

Joe Fox (Hanks) and Kathleen Kelly (Ryan) are both active in the New York bookstore scene, but at very different levels. Joe is a high-ranking executive for "Fox Books", an ever-expanding chain of bookstores. Kathleen runs "The Shop Around The Corner", a small independent bookstore, inherited from her mother. As she keeps losing customers to Fox Books and is in danger of going bankrupt, Kelly starts a public campaign against the chain. Naturally Joe and Kathleen's relationship is adversarial.

Meanwhile the two are involved in rather unsatisfying romantic relationships and feel lonely. They search for pen pals over the Internet. Fox uses the screen name "NY152"; Kelly goes by "Shopgirl". They soon become friends and begin courting over the Internet, each unaware that their new love interest and business rival are the same person.