Film / You Will Meet a Tall Dark Stranger 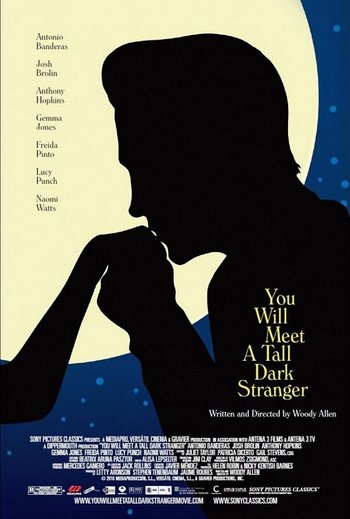 Alfie (Hopkins) and Helena (Gemma Jones) divorce. Helena begins seeing a fortune teller named Cristal (Pauline Collins) for spiritual advice. Their daughter Sally (Watts) has a troubled marriage with author Roy (Brolin), who once wrote a successful book, and is now anxiously waiting for response from his publisher about the manuscript of his newest one. Helena helps pay their rent.

Alfie marries a prostitute, Charmaine (Punch). Roy falls for Dia (Pinto), a musicologist he sees through a window near his and Sally's flat, who is engaged to another man. Sally considers having an affair with Greg (Banderas), her new boss at an art gallery who she confesses she has feelings for. However, Greg confesses he is having trouble at home and eventually it turns out he is having an affair with Iris (Friel), Sally's protégée. Helena begins a friendship with Jonathan (Ashton-Griffiths), the keeper of an occult bookshop, which develops into romance. All of this sets up everyone for a rude awakening.