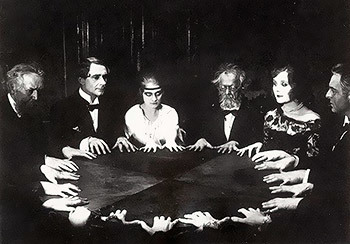 A séance is an attempt to communicate with the spirits of the dead, usually involving a gathering of individuals who sit down around a table and led by a medium.

Séances were popular forms of entertainment around the mid-nineteenth and early twentieth century, during which time many people became interested in spiritualism and the occult. Usually the medium would attempt to contact the spirits while asking everyone else in the room to concentrate on summoning and welcoming them. Real séances did not require a dark room, just a pleasantly peaceful atmosphere. The darkened room came into vogue when people started trying to produce materialized "phenomena" — most of which you could buy from theatrical supply companies.

The lights may flicker or the room suddenly grow colder, and the medium would either become possessed by the spirit that was summoned or merely speak with it. Objects might start being thrown about the room to show that the ghost is present and active. Once for Yes, Twice for No is another common element (and it's Truth in Television). After that there's usually a lot of dramatic screaming and fainting.

Sometimes the séance is revealed to be a hoax created by a Phony Psychic, although it still may turn out to be Real After All...

If it's a murder mystery, expect someone to take advantage of the lights being out to kill their target. "But we were all holding hands!"