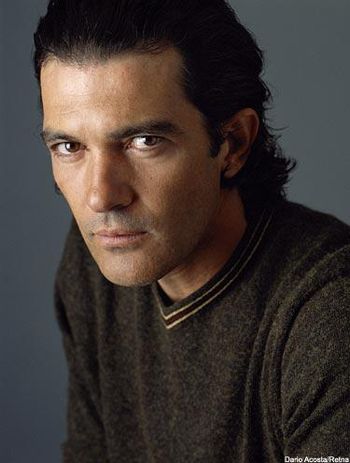 Hello. I am Antonio........y Banderas. I am actor.
"I think movies serve many different purposes, from those movies that are frivolous and just an entertainment, to movies that just go to exploring the complexities of the human soul. Everything is valid if it's done with honesty and dignity, and I actually do both of those types of movies in my career."
Advertisement:

Want a real life example of a Dashing Hispanic? Antonio Banderas (born José Antonio Domínguez Bandera on August 10, 1960 in Malaga, Spain) is your man. He began his acting career at age 19 with a series of films by director Pedro Almodóvar, and later became internationally well-known for playing Zorro in The Mask of Zorro and its sequel The Legend of Zorro, the first Spaniard to play the Spanish Californian hero.

Kids are more likely to remember him as Puss-In-Boots in Shrek (effectively Zorro as a cat) and Gregorio Cortez in Spy Kids.

He is notably less typecast in Spain, where he is considered a very versatile leading man thanks to that stint under Almodóvar. He's really beloved in his country for being the most internationally recognized Spaniard actor during the 90s, and helped to open the way to Hollywood for other of his countrymen like Penélope Cruz and Javier Bardem (both of which are good friends with him).

And he sings. Beautifully. And plays guitar. And dances a mean tango.

Tropes & Trivia in his career: