Film / Women on the Verge of a Nervous Breakdown 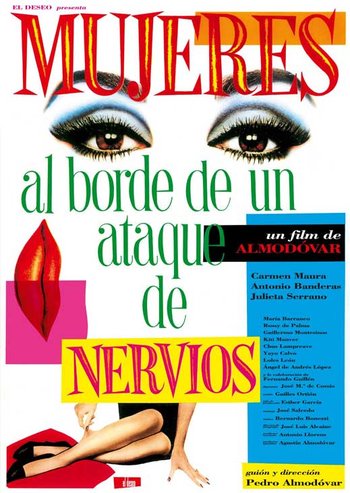 Women on the Verge of a Nervous Breakdown (Mujeres al borde de un ataque de nervios) is a 1988 film from Spain directed by Pedro Almodóvar.

Pepa Marcos (Carmen Maura) is an actress who stars on television and also dubs Hollywood films into Spanish. Pepa is depressed because her boyfriend Ivan has just dumped her. Pepa, who has something very important to tell Ivan, keeps trying to call but can only get his answering machine. Pepa looks for him at work and even stakes out his apartment, but never can find him.

Pepa, who is stressed out, can hardly be bothered to focus on her jittery friend Candela, who arrives at Pepa's apartment in a state of extreme agitation. It turns out that Candela's boyfriend is a Shiite terrorist who was hiding out in her home with two fellow terrorists, and Candela is terrified that she might go to jail. Meanwhile, none other than Ivan's son Carlos (Antonio Banderas) and his fiancée Marisa have arrived at the apartment, which they are looking to sub-let.