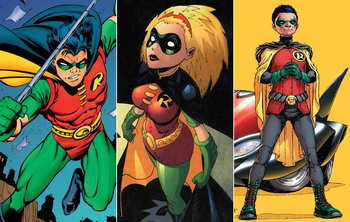 Just three of the heroes to don the mask of Robin.note L - R: Tim Drake, Stephanie Brown, and Damian Wayne. Not pictured: Dick Grayson and Jason Todd.
"Roberts had grown so rich, he wanted to retire. So he took me to his cabin and he told me his secret. 'I am not the Dread Pirate Roberts,' he said. 'My name is Ryan; I inherited the ship from the previous Dread Pirate Roberts, just as you will inherit it from me. The man I inherited it from was not the real Dread Pirate Roberts either. His name was Cummerbund. The real Roberts has been retired 15 years and living like a king in Patagonia.' Then he explained the name is the important thing for inspiring the necessary fear."
— The Fourth(?) Dread Pirate Roberts, The Princess Bride
Advertisement:

You just can't keep a good character down. Even in a setting where Death Is a Slap on the Wrist, a hero can't keep his heroics up forever (nor do most want to) and even if super-villains and world-spanning disasters can't kill him, old age definitely will. But while a man can't beat the Reaper forever, the identity he holds is contained in a vessel consisting of little more than a name and a mask, meaning that if he cannot continue his Legacy, someone else can.

A Legacy Character is a character whose identity is passed down to them from an older character in the form of a title, job or persona for the newer character to assume. There are many ways this can come about:

Outside of the work, Legacy Characters are especially popular as superheroes and action heroes, or any job that involves a Secret Identity. Long-Runners that span multiple generations of characters are the most likely to use them, but they can also be created as part of a back-story, such as a Secret Legacy.

Adaptations of a work with Legacy Characters to other media often only reference the current or best known holder of the legacy, only referencing other incarnations as a Mythology Gag. Younger heroes carrying the mantle often get a Rogues Gallery to match their predecessors, either via villains having kids of their own (much to the parent's chagrin), or younger villains "honoring" their own villainous legacy.

Compare The Nth Doctor, Legacy of the Chosen. If the young character, parent, and grandparent each make a unique name for themselves instead of passing down a persona it's Three Successful Generations. If the character is a vessel instead of a person, see Legacy Vessel Naming.

Compare/contrast Ancestral Name, where a child's is named after their parents or a more distant ancestor, but doesn't necessarily continue their predecessor's career legacy.