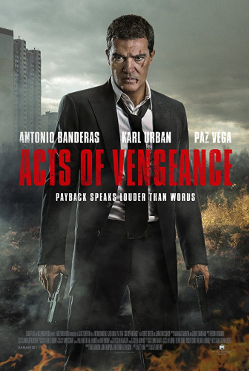 "Punish only he who has committed the crime."
—Marcus Aurelius, Meditations
Advertisement:

Frank Valera (Banderas) is an immensely successful lawyer with a reputation of having a silver tongue. One bad night, however, he returns home to find his wife and little daughter murdered in their car. Seeing his life crumble in front of his eyes, and upon finding out that the cops are completely in the dark with the case, Valera becomes a self-punishing alcoholic that finds solace as a tomato can in an illegal Mixed Martial Arts circuit. However, after getting in a street fight while trying to help a child prostitute, he falls through the window of a discount book store, where he fortuitously grabs Marcus Aurelius' Meditations to stop the bleeding of a wound. Valera then discovers the ancient philosophy of Stoicism, and resolves to become a killing machine and undergo a vow of silence until he discovers who killed his wife and daughter.

Not to be confused with the 1974 film Act of Vengeance.

Tropes in Acts of Vengeance include: