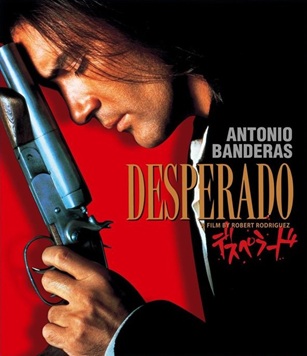 He came back to settle the score with someone. Anyone. EVERYONE.
"So, I'm sitting there...and in walks the biggest Mexican I have ever seen. Big as shit. Just walks right in like he owns the place. Now, nobody knew quite what to make of him, or quite what to think. There he was and in he walked. He was dark, too. I don't mean dark-skinned. No, this was different. It was as if he was always walking in a shadow. I mean every step he took towards the light, just when you thought his face was about to be revealed...it wasn't. It was as if the lights...dimmed...just for him."
— Buscemi, about El Mariachi
Advertisement:

Desperado (1995), a.k.a. Pistolero in Spanish, is an action thriller film starring Antonio Banderas. It is the second movie in Robert Rodriguez's Mexico or Mariachi Trilogy , following El Mariachi and followed by Once Upon a Time in Mexico. Has the interesting distinction of being one of very few sequels to be in an entirely different language from the first movie.

Our protagonist, known only as "El Mariachi," has lost his love and put down her killer. Ever since losing her, however, he has changed. No longer the innocent who just wanted to play his guitar and get by, he has made a transformation into a hard, vengeance-driven gunslinger who has made the cartel that Moco worked for his enemy; and is seeking out the cartel's boss, who goes by the name of Bucho, so that he can finish the job. Unfortunately for El Mariachi, he'll have to use every gun in his guitar case against Mooks in seedy bars, thugs after his life, a knife throwing assassin, to do it. And all of this while keeping Carolina (Salma Hayek), his new love interest, friend and informant, and random bystanders alive.

Not to be confused with Desperados or the Eagles album Desperado and its title track.