Film / Devil in a Blue Dress 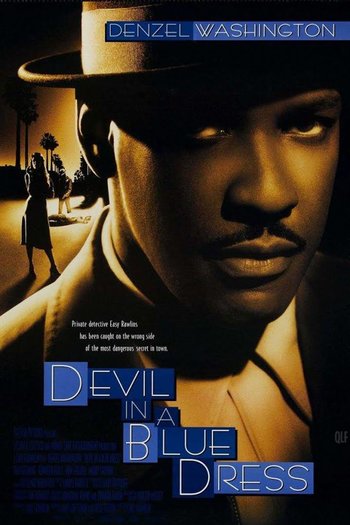 A 1995 Neo-Noir mystery thriller directed by Carl Franklin and adapted from the novel of the same name by Walter Mosley, the first in his Easy Rawlins series. It stars Denzel Washington as Ezekiel "Easy" Rawlins and Don Cheadle as Mouse Alexander.

Easy Rawlins is a WWII vet trying his best to live the American Dream in 1948 Los Angeles. Having just been laid off his job and struggling with mortgage payments, Easy's bartender friend, Joppy (Mel Winkler), points him to the shady DeWitt Albright (Tom Sizemore), who's looking to find a woman. Albright is looking for Daphne Monet (Jennifer Beals), girlfriend of the mayoral candidate Todd Carter (Terry Kinney). Daphne's gone missing and Easy is paid quite well just for details on her location. As untrustworthy as Albright is, Easy needs the money and agrees to do it, getting caught up in a disastrous web of lies and crime.