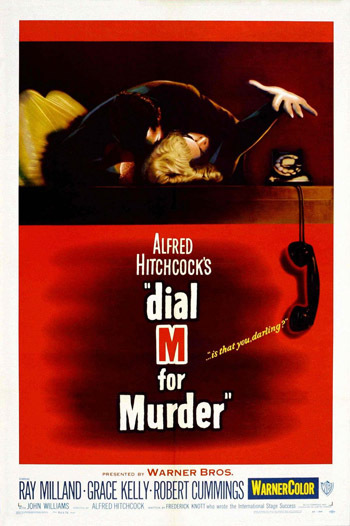 Dial M for Murder is a 1954 mystery/thriller film directed by Alfred Hitchcock and based on a play of the same name by Frederick Knott, who also wrote the screenplay adaptation for the movie.

In London, retired tennis player Tony Wendice (Ray Milland) discovers that his wealthy wife Margot (Grace Kelly) is cheating on him with crime author Mark Halliday (Robert Cummings). Tony decides to have her murdered, because he is the inheritor of her will, but if she were to divorce him he'd lose her money. With a mixture of blackmail and reward, he gives the task to Swann (Anthony Dawson), an old classmate of his, whom he knows to be a crook.

Tony creates a plan which he believes to be perfect; however, things go wrong, and Margot manages to kill Swann. Tony is still able to use the situation to his own advantage, making it look as if Margot murdered Swann because he was blackmailing her. It appears to be working, except that Mark doesn't believe she's guilty and the police, led by Chief Inspector Hubbard (John Williams), uncover a few anomalies...

Dial M For Murder was filmed in 3D, but by the time of its release, the 3D fad was dying out, so it had only a brief theatrical run in the format, followed by a conventional, "flat" release. Despite 3D being a gimmick, Hitchcock was able to employ it effectively, without too much distraction from the rest of the film.

The film was remade in 1998, with the title A Perfect Murder.