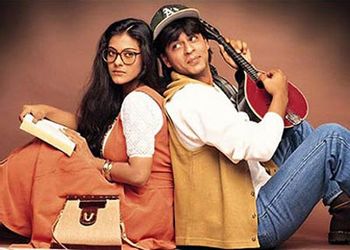 Dilwale Dulhaniya Le Jayenge (The Braveheart Will Take The Bride) is a movie directed by Aditya Chopra and released in the year 1995 that started the twin trends of Bollywood pandering to Non-Resident Indians and a romance that does not end with the couple in love running away from their parents (sort of). It starred the hit couple of Shah Rukh Khan and Kajol with catchy songs.

The movie starts with demure Simran's (Kajol) dream to fall in love with the Prince of her dreams. Her father, Baldev Singh, is the owner of a convenience store in Britain and is always dreaming of Punjab. He receives word from his childhood friend Amit Singh in Punjab and decides to marry his daughter Simran to his son, Kuljit. Simran begs her father to let her on last trip to see Europe, before she is married and confined to the four walls of a home forever. On the way, Simran meets Raj (Shah Rukh Khan) a happy-go-lucky Jerk with a Heart of Gold during a tour of Europe. They start out fighting like cats and fall in love during their time together.

After returning home, Simran confesses to her mother that she has fallen in love with someone else and she cannot go through with her arranged marriage. Her father Baldev overhears and promptly moves the entire family back to Punjab. Raj figures out that Simran was taken against her will to India and follows her there. He decides that not only will he take his love with him back to Britain but that he will get the permission and approval of her strict father as well. And so the second half of the movie shows the misadventures of Raj as Raj attempts to hide his identity and charms Simran's father and her family in Punjab. Hilarity ensues.

Fun fact: the Maratha Mandir Theatre in Mumbai is still showing the film weekly since it was first released back in 1995.note The record was temporarily halted when the COVID-19 Pandemic forced all theaters in India to close for eight months in 2020, but as soon as cinemas reopened, the film was put back on. There are people who have seen the film dozens of times, but still clap, mouth the dialogues, and sing along, earning it comparisons with The Rocky Horror Picture Show. In 2001, it surpassed Sholay (which ran for five years straight at the Minerva Cinema, also in Mumbai) as the longest-running film in Indian cinema history.