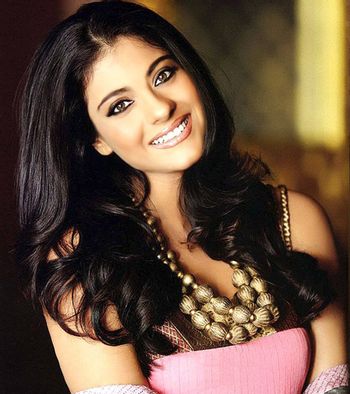 Kajol Devgn, (born Kajol Mukherjee, 5 August 1974), popularly known as Kajol, is an Indian film actress appearing in Hindi films. She belongs to a kind of "female dynasty" of Bollywood actresses, with her mother, aunt, maternal grandmother and maternal great-grandmother all having starred in films. (The great-grandmother got her start in the 1930s.)
Advertisement:

Kajol made her acting debut in the film Bekhudi (1992) and had her first commercial success with her second film Baazigar (1993) along with Shah Rukh Khan, with whom she would deliver some of Bollywood's biggest hits, like Dilwale Dulhania Le Jayenge (1995), Kuch Kuch Hota Hai (1998) and Kabhi Kushi Kabhie Gham (2001). Her performances in all three of these films were praised and earned her three Filmfare Best Actress Awards. After the successful Kabhi Kushi Kabhie Gham in 2001, she took a sabbatical from full time acting for five years. She made a comeback with Kunal Kohli's Fanaa (2006), for which she received her fourth Best Actress award at the Filmfare. Kajol is highly regarded as one of India's most successful and talented actresses, but has not been very active since the birth of her son (her second child) in 2010.

Wife of fellow actor Ajay Devgn-with whom she has two children-and cousin of Rani Mukherji.