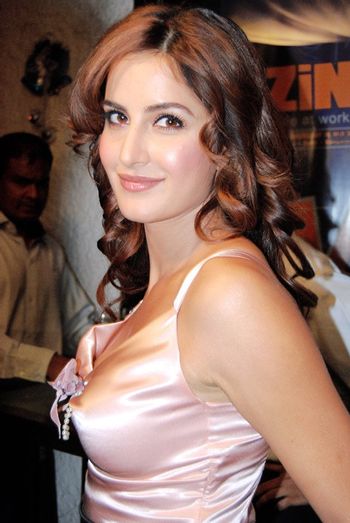 Katrina Kaif is a Hong Kong-born British-Indian actress and model who has starred in several commercially successful films, which makes her one of the popular actresses in current Bollywood. She is most famous for her dancing skills.

Katrina Kaif was born in Hong Kong to a Kashmiri Muslim father, Mohammed Kaif, and a British Christian mother, Suzzane.

Kaif's London modeling work led to her discovery by filmmaker Kaizad Gustad, who gave her a part in his film Boom (2003). She moved to Mumbai and was offered a number of modeling assignments. However, filmmakers were initially hesitant to sign her because she could not speak Hindi.

Kaif saw success with the 2005 film Sarkar where she had a small role as Abhishek Bachchan's girlfriend. Her next release, Maine Pyaar Kyun Kiya (2005), where she was paired opposite Salman Khan, earned her an award at the Stardust Award for breakthrough female performance.

In 2007 Katrina appeared in the hit movie Namastey London, wherein she starred as a British girl alongside Akshay Kumar for the second time after the box office dud Humko Deewana Kar Gaye. She has since featured in a series of box office hits that include Apne, Partner and Welcome.

2008 saw her play a negative role for the first time in Abbas-Mustan's hit action thriller Race. She played the role of Saif Ali Khan's secretary who is secretly in love with his hostile stepbrother played by Akshay Khanna. She appeared next in Anees Bazmee's box office super-hit Singh Is Kinng alongside Akshay Kumar for the fourth time. Kaif's final release of the year, Subhash Ghai's Yuvvraaj, was a surprise critical and commercial failure.

Kaif's first release for 2009, New York, with John Abraham was a critical and commercial success. Kaif's performance was highly appreciated with critic Taran Adarsh writing, "Katrina gives you the biggest surprise. Known for her glamour roles, Katrina proves that she can deliver if the director and writer offer her a role of substance. She's outstanding. In fact, people will see a new, different Katrina this time." In 2011, she had a major hit with Mere Brother Ki Dulhan, and received a great deal of credit for its success because the two main male characters were played by B-list star Imran Khan and newcomer Ali Zafar.

She has remained close to her mother and younger siblings, and is more or less the breadwinner of the family. She is not married, but reputedly spent much of her early career dating Salman Khan, who had helped get her into the film industry, and who she is still great friends with. Because she tries to keep her private life private, and usually doesn't get into feuds or scandals, the media has a hard time coming up with news stories about her, and used to spend a lot of time trying to prove that her father, who is estranged from the family, isn't who she says he is, but is instead a westerner or other non-Indian.