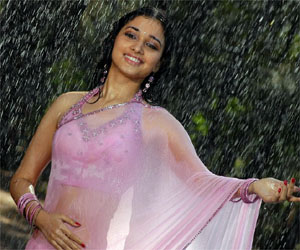 In Bollywood films, it's pretty much a cliche that if an attractive woman is wearing a sari, she will get soaking wet at some point in the movie (getting soaked in the rain is considered especially romantic).

India has a legally enforced nudity taboo, so this is Fanservice without the nudity (even if you do see breasts, but not nipples).