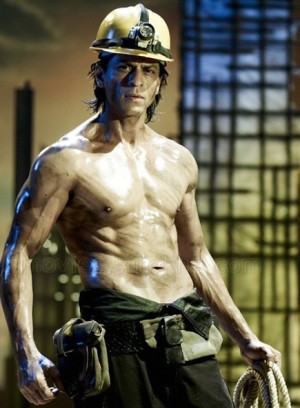 I'm the king of Bollywood! I can do whatever I want! (But I won't do that)
"You don't know who you're dealing with here! This is KHAN! The Tom Cruise of India, the Brad Pitt of Bollywood, the Shia Labeouf of Mumbai, the Topher Grace of New Delhi, the dude from Twilight of Calcutta!"
— Aasif Mandvi, The Daily Show
Advertisement:

Also called SRK or King Khan by those in the know. Chances are, if you've heard of Bollywood, you've heard of SRK (born Shahrukh Khan, 2 November 1965). Maybe in a newspaper article calling him Bollywood's Tom Cruise or Harrison Ford, as in the page quote, but none of those descriptions can capture the mystique, the appeal, the popularity of the man himself.

Famous for playing endearing manchildren who mature due to the the love of a good woman, but he does get some range in now and again by playing the Stalker with a Crush (Darr, Anjaam, Dil Se..), Buddhist Emperors (Asoka), Super Coach to the Indian women's hockey team (Chak De! India), and the eponymous Don.