Two Shots from Behind the Bar 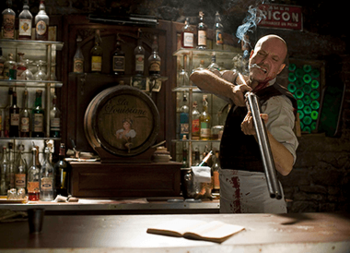 Well, he said "last call for shots". He wasn't kidding.
So the hero wanders into a seedy bar. Maybe he brushes against a less-than-reputable goon. Maybe the goon is just looking to pick a fight. Maybe the hero can't afford to pay the tab. Whatever the case, this scenario can only end in bloodshed.
Advertisement:

The bartender quickly dives behind the bar. A cowardly move... but then he emerges, shotgun in tow and ready to quell any disturbances to his business.

This action is not necessarily limited to bartenders, although it is a common occurrence. Similarly, while the shotgun is a common firearm used, other firearms such as rifles or pistols (even big ones) may be used. The key point is that the firearm is retrieved specifically from the bar.