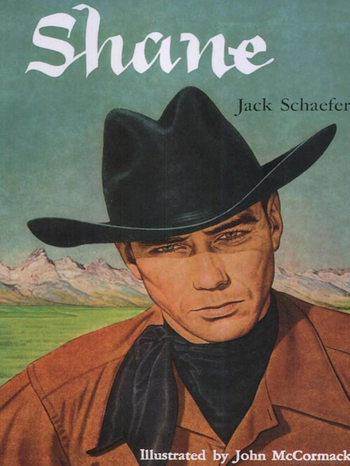 The original novel by Jack Schaefer, on which the classic film was based. The novel was written in 1949, and is Schaeffer's best-known work.
Advertisement:

The story is narrated by the adult Bob Starrett (who was renamed Joey for the movie), as he tells of his childhood during the summer of 1889. The story starts when the mysterious eponymous horseman emerges at the Starrett farm and asks to use their water pump to freshen up himself and his mount. Joe Starrett, the patriarch of the family, convinces the visitor, who gives his name as simply Shane, to have dinner with them and rest at their home for the night. That one night's stay-over eventually extends to several months, as Shane is hired to help Joe fix up the farm in preparation for the winter and gradually becomes embroiled in Joe and his fellow homesteaders' ongoing feud with local cattle baron Luke Fletcher (who was renamed Rufus Ryker for the movie).

The Film of the Book, which was released in 1953, was reasonably faithful to the novel, but made significant expansions.