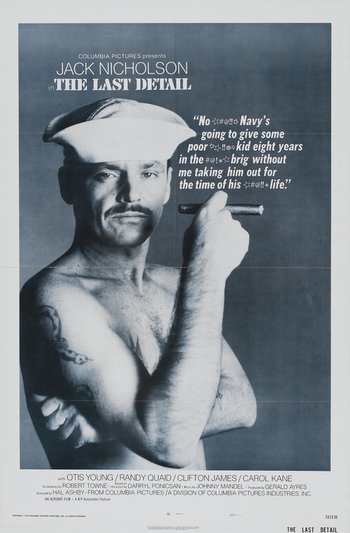 Buddusky: (after the bartender refuses to serve Meadows a drink because he's underage) I'm gonna kick your ass around the block for drill, man.
Bartender: You try it, and I'll call the shore patrol.
Buddusky: (pulls his gun out and slams it on the bar) I am the motherfucking shore patrol, motherfucker!
Advertisement:

The Last Detail is a 1973 comedy-drama film directed by Hal Ashby and written by Robert Towne, which is based on the novel by Darryl Ponicsan. It stars Jack Nicholson, Otis Young and Randy Quaid. The film was nominated for three Oscars: Best Actor for Nicholson, Best Supporting Actor for Quaid and Best Writing, Screenplay Based on Material from Another Medium for Towne. While not winning any Oscars, Nicholson did win Best Actor when it was shown at the 1974 Cannes Film Festival. The movie is notorious for its use of profanity (with over 60+ uses of the word "fuck", a then record for most uses of the word), so much so that the studio had cold feet before releasing it.

Signalman First Class Billy "Badass" Buddusky (Nicholson) and Gunner's Mate First Class Richard "Mule" Mulhall (Young) are tasked with escorting an 18-year old sailor named Larry Meadows (Quaid) to the Portsmouth Naval Prison. His crime was attempting to steal $40 from a collection box for a charity from his commanding officer's wife. They were so upset with his attempt to steal, his punishment would be 8 years in prison and dishonorably discharged. Both Buddusky and Mulhall feel that this is quite a stiff punishment for the young man and on the way to the prison, they take a liking to Meadows, and feeling bad he'll miss most of his young adulthood, decide to show him a good time, to indulge in the pleasures such as getting drunk and finding a whore.

Nicholson and Towne would collaborate again the following year, on Roman Polański's Chinatown.