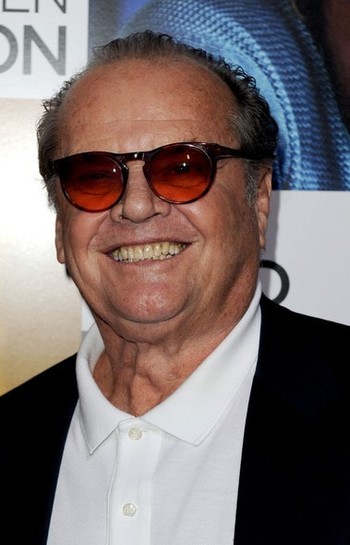 HERE'S JACKIE!
"I don't want people to know what I'm actually like. It's not good for an actor."
Advertisement:

You want us to describe Jack Nicholson here? You want the TRUTH?!

YOU CAN'T HANDLE THE TRUTH!

But if you insist...If you want a candidate for the title of "best actor of all time", John Joseph "Jack" Nicholson (born April 22, 1937) is the man — though he's not so much an actor as a force of nature.

Nicholson has been nominated for Academy Awards twelve times. The Best Actor twice, for One Flew Over the Cuckoo's Nest and As Good as It Gets. He also won Best Supporting Actor for Terms of Endearment. He is tied with Walter Brennan and Daniel Day-Lewis for most acting wins by a male actor (three), and second to Katharine Hepburn for most acting wins overall (four). He is also one of only two actors nominated for an Academy Award for acting (either lead or supporting) in every decade from the 1960s to the 2000s (the other being Michael Caine).

He has also won seven Golden Globe Awards, and received a Kennedy Center Honor in 2001. In 2010, he was the very enthusiastic honorary starter for the Indianapolis 500. In 1994, he became one of the youngest actors to be awarded the American Film Institute's Life Achievement Award.

He is internationally renowned for his often dark-themed portrayals of neurotic characters, such as The Joker in Tim Burton's Batman (1989) and Randle McMurphy in One Flew Over the Cuckoo's Nest. He's also known for keeping up his career, as he has to approve of the script personally to make the movie and thus often avoiding only doing his roles for the money. However, his talents don't come cheap, and he set a record for then-highest paid actor for a single role when he played The Joker.

Also, because Nicholson is a massive Los Angeles Lakers fan, attending every home game, his shooting schedule has to revolve around the Lakers' schedule.

He was raised believing his mother was his sister and his grandmother was his mother because his birth mother was underage, unmarried, and Roman Catholic. Both were long dead when he found out—in a conversation with a reporter from Time magazine about Chinatown. The irony has been noted on several occasions. According to him, "My mother never saw the irony of calling me a son of a bitch."

Nicholson retired from acting in 2010. He is the Trope Namer of The Genie Knows Jack Nicholsonnote The Genie in Aladdin imitates Nicholson when Aladdin tries to find the right things to say to Princess Jasmine.

Jack Nicholson has appeared in many films, including:

His works provide examples of the following tropes: