Film / The Little Shop of Horrors 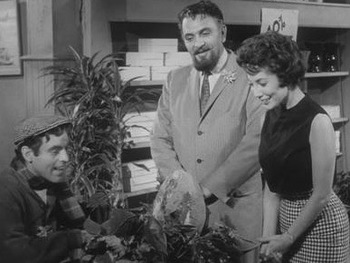 "Look at it, it grows like a cold sore from the lip."
— Gravis Mushnick, regarding Audrey Jr., the man-eating plant.
Advertisement:

Often confused with the 1980s musical that it inspired, The Little Shop of Horrors is a low-budget 1960 comedy horror film, directed by Roger Corman and written by Charles Griffith. The rather loose plot concerns a bumbling florist's assistant named Seymour Krelboin (Jonathan Haze), whose plant cross-breeding experiments accidentally create a talking plant with hypnotic powers that feeds on human blood.

It was famously filmed in under 48 hours, using pre-existing sets that were built for a different film. It also features a then-unknown Jack Nicholson in a small role as masochistic dental patient Wilbur Force, who consequently tends to get top billing whenever the film is released on home video.

Years later, the movie was adapted into a stage musical by Howard Ashman and Alan Menken, itself turned into a feature of its own directed by Frank Oz. The film and/or musical also probably served as partial inspiration for the plant in Stephen King's The Plant. Probably the biggest impact this movie had on pop culture? The Piranha Plants in Super Mario Bros..

Since this movie is in the public domain, you can watch it for free or download it from a bunch of sources, including Hulu,