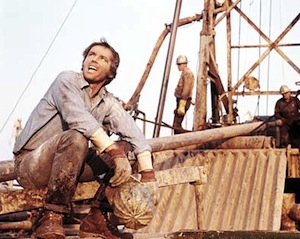 "I move around a lot, not because I'm looking for anything really, but 'cause I'm getting away from things that get bad if I stay."
— Robert Dupea
Advertisement:

A 1970 drama film that marked Jack Nicholson's transition from promising character actor to outright movie star. One of the early films of the so-called "American new wave" that flourished in the early 1970s, it featured flawed and often unsympathetic characters, idiosyncratic dialogue, and an ending that did not offer any conventional resolution. It follows Robert Dupea (Nicholson), a California oil rig worker living with his girlfriend Rayette (Karen Black), a diner waitress. When his sister Partita (Lois Smith) informs him that their father is ill, he returns to his family's estate to face his father, his brother Carl (Ralph Waite) and his own chaotic past.

The title is a reference to a well-known introductory piano book, containing "five easy pieces" for beginners. In latter days this film has become something of a Watch It for the Meme example, being best remembered for the iconic scene where Robert does battle with an unhelpful waitress (see Overcomplicated Menu Order below).