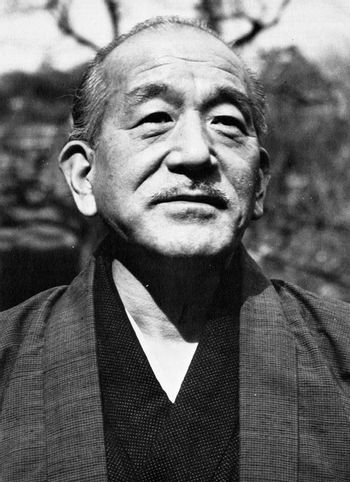 Someday, I'm sure, foreigners will understand my films. Then again, no. They will say, like everybody else, that my films aren't much of anything.
Advertisement:

Ozu differed from most of his contemporaries within Japanese Cinema in that he didn't make films in the Jidaigeki (i.e. period film or Historical Fiction genre) that was all the rage (the exception is Floating Weeds, which is a period film about actors and is not really action packed). Most of his films, especially his most popular ones, are set resolutely in contemporary Japan. Most of them are comedies, or family-dramas (with comedic scenes) dealing with the middle-class and the lower-middle class, and a lot of them, especially the films he made in The '50s, feature older characters (grandparents especially) as protagonists. And yet, despite all that, he was one of the most popular and commercially successful film-makers in the '50s Japan.

Ozu's reputation within Japan was uncontested in his lifetime. He was seen as a senior statesman and notably intervened on behalf of the young Akira Kurosawa when his first film, Sanshiro Sugata, irritated some producers and censors. But everyone within Japan was convinced that his films wouldn't attract an international audience because they were "too Japanese", with many convinced that Kurosawa attracted attention because he was "too Western". The actual story is a good deal more complicated; Ozu was by all accounts an avid cinephile who loved Hollywood films (King Vidor and Ernst Lubitsch were his favorites), and his most famous film, Tokyo Story, was a remake of Make Way for Tomorrow by Leo McCarey. Ozu never missed a chance to flaunt his love for movies by putting movie posters of his latest favorites in the background of his films; indeed, David Bordwell argued that Ozu was one of the most cinephilic directors before the French New Wave. The distinct style of Ozu's films, the "tatami shots", the lack of camera movements, and the complete violation of the classical editing pattern (i.e. the 180 degree axis and shot/reverse shot staging of dialogue scenes) initially led many to assume that Ozu was a Japanese naive artist, i.e. a kind of primitive making films in line with Japanese culture, but Ozu was vastly different from Japanese cinema as well. When Ozu finally did get international recognition, courtesy of Donald Richie (the American GI stationed in Japan who became a major scholar of Japanese culture and cinema), he was bemused with the many interpretations of his films from international viewers, joking at one point, "when Americans don't understand something Japanese, they say it's Zen."

His personal life is the subject of much interest by scholars within Japan and around the world. He lived all his life with his mother and never married; he was known to be an alcoholic whose screenplays were written with his pal Kogo Noda in the middle of binges drinking sake (leading to jokes among film historians that the American director he'd most likely get along with is "Bloody" Sam Peckinpah), and was expelled from his school for writing a love letter to a boy

but known in his adult life (as recorded in his diaries) for frequenting prostitutes. The drastic contrast between his personal life, largely solitary, quite social, and certainly quite filled with "the other", from the content of his films (largely focused on the Japanese middle-class) has made him a source of enduring fascination.

Within Japan, in the height of his fame and popularity, Japanese audiences, contemporary film-makers, as well as would-be rebels wanting to tear down the system (such as Kurosawa, Imamura, Oshima) saw Ozu as a kind of stodgy film-maker whose films are sentimental glorification of the Japanese family and The Patriarch who is perennially betrayed and disillusioned by his kids. Later writers (including some of the same rebels) saw Ozu as an experimental film-maker whose subject was the breakdown of the Japanese family, the alienation of his characters from the roles assigned by society, and are in fact heavily critical of the Japanese father-figure. Much of his films are celebrated for their portrayal of women, with female characters having depth and complexity beyond being simply love interest, while also showing some of the harshness of marriage (such as Domestic Abuse and spousal rape in A Hen in the Wind). The films he made during the early depression are silent comedies about the travails of the poor, many of them inspired by Chaplin (the most celebrated is I Was Born, But...). His post-WWII films are known for examining the same subject, the domestic affairs of the bourgeois family; the movies he filmed before the war study the social struggles of Japan's lower-class denizens.

Internationally, Ozu's films upon rediscovery was celebrated by Paul Schrader (who wrote a book on him), Wim Wenders, Claire Denis, Hou Hsiao-hsiennote Who actually didn't see Ozu's films until his international fanboys compared to him, and upon seeing them, decided he was a fan after all, Abbas Kiarostami among many others.

The films of Yasujiro Ozu include: