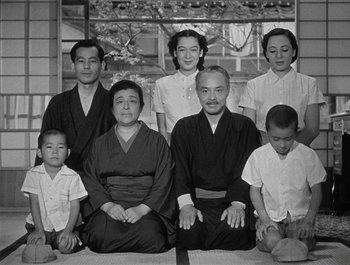 Early Summer is a 1951 film from Japan, directed by Yasujiro Ozu.

Noriko (played by Ozu's regular lead actress, Setsuko Hara) is a 28-year-old woman working as a secretary in Tokyo. She still lives with her whole family, which includes her father Shukiki and her mother Shige, her doctor brother Koichi (another Ozu regular, Chishu Ryu), Koichi's wife Fumiko, and Koichi and Fumiko's young children, Minoru and Isamu.

Noriko being unmarried as she nears her 30th birthday is a concern in the household. Noriko's boss Satake proposes a match with one Mr. Manabe, a bachelor in his early forties. The family eagerly seizes on this idea, but Noriko is reluctant. When Kenkichi, Koichi's partner in practice and an old family friend, pays a visit, Noriko gets an idea of her own.

Compare another Ozu film, Late Spring (1949), which also starred Setsuko Hara as a character named Noriko (but not the same character), and has very similar story elements, with the Noriko character being pressured by her family into an undesired Arranged Marriage.