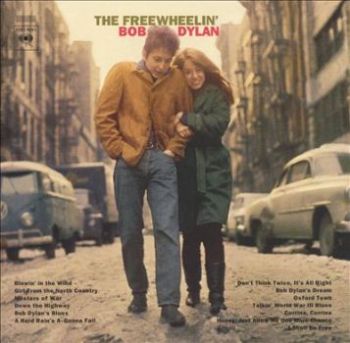 How many ears must one person have before he can appreciate this classic? The answer, my friend, is blowing in the wind.
Advertisement:

The Freewheelin' Bob Dylan is the second studio album by Bob Dylan, released in 1963. It was the first Dylan album where his own material exceeded his covers. It is best remembered for the hits "Blowin' in the Wind", "Masters of War", "A Hard Rain's a-Gonna Fall", "Girl from the North Country" and "Don't Think Twice, It's All Right". It's equally famous for its iconic cover photo of Dylan and his then-girlfriend walking down a New York City street.

"Rocks and Gravel", "Let Me Die In My Footsteps", "Gamblin' Willie's Dead Man's Hand" and "Talkin' John Birch Blues" were originally supposed to appear on the album, but against Dylan's wishes, they were replaced at the last minute with "Girl from the North Country", "Masters of War", "Talkin' World War III Blues" and "Bob Dylan's Dream".

In 2002, the album was among the first sound recordings to be included in the National Recording Registry for its "historical, cultural and aesthetical importance".

This album offers freewheelin' examples of: