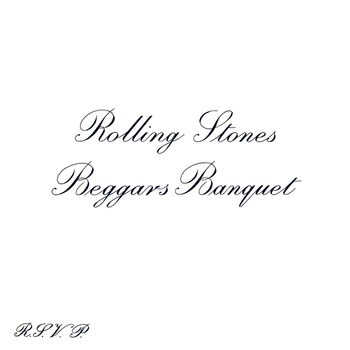 "Please allow me to introduce myself / I'm a man of wealth and taste..."
Click here to see the "toilet" cover originally intended for the album, rejected by Decca and used on post- 1986 reissues. 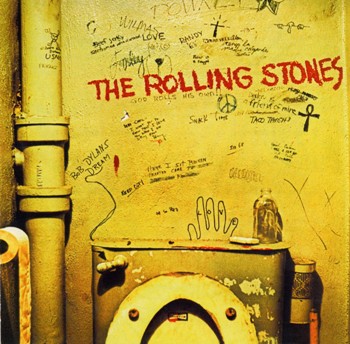 Beggars Banquet is the seventh studio album (ninth American album) by The Rolling Stones, released in December 1968 on Decca Records in most of the world and its subsidiary London Records in the US and Canada. It is considered a return to their old rebellious and subversive roots, compared to their previous albums, the psychedelic Between the Buttons and Their Satanic Majesties Request, both from 1967. Beggars Banquet is best remembered for such tracks as "Sympathy for the Devil", "Stray Cat Blues", and the hit single "Street Fighting Man", and is ranked among the band's best albums.

Brian Jones, who halfheartedly showed up to the recording sessions, was playing a far lesser role in the band by this point and had his judgment marred considerably through drug abuse. While Jones contributed a few minor instrumentals, most notably the slide guitar on "No Expectations" and sitar on "Street Fighting Man", Mick Jagger and Keith Richards largely conceived of an album which would return to a Blues-inspired, Country sound heavily associated with the working conditions of the poor. Achieving unity in structure even while exploring such diverse topics as underage groupies, chaotic riots, and religious symbolism, the Stones sought to reconcile these complex ideas to represent the political restlessness of the era through a more simplistic sound.

The album's release was delayed considerably due to the ongoing conflict between the Stones and their record label, which despised the original "toilet" cover art and forced its replacement. While the original cover was eventually reinstated on reissues, this conflict speaks to the band's rapidly shifting role from a group of talented musicians to a mouthpiece for a generation. From the introductory track, which is the Trope Namer to Sympathy for the Devil and Man of Wealth and Taste, to the largely Self-Deprecating indictment of debauchery of their lifestyle, the songs both implicate society and defend the people largely undercut by privilege. Fitting for an album heavily influenced by the violence and politics of the 1960s, the cover and the album's themes are now viewed as a celebration of cultural rebels and impoverished people disenfranchised by society.

In any case, the influential recording sessions to some songs of this album were filmed in Jean-Luc Godard's One Plus One/Sympathy for the Devil from 1968. A documentary about the creative process behind the making of this album can be seen in the Classic Albums TV documentary series.

Please allow us to introduce these tropes...