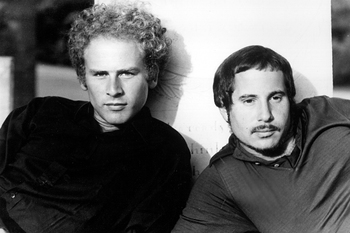 Beavis and Butt-Head, if they were polite.note Art Garfunkel (left) and Paul Simon (right).
Hello darkness, my old friend
I've come to talk with you again
Because a vision softly creeping
Left its seeds while I was sleeping
And the vision that was planted in my brain
Still remains
Within the sound of silence
— "The Sound of Silence"
Advertisement:

Paul Simon and Art Garfunkel (both born 1941) first came together in 1957 under the name "Tom & Jerry", but rose to fame as Simon & Garfunkel nearly a decade later, mostly due to their chart-topping 1965 hit "The Sound of Silence". Both men were childhood friends, having growing up in Queens, New York a few blocks away from each other.

With the release of "The Sounds of Silence", Simon & Garfunkel became one of the Trope Codifiers of folk-rock alongside The Byrds. The song was also their first hit on the pop charts, reaching the number one spot on New Year's Day in 1966. Subsequent hits included "I Am a Rock", "Homeward Bound", and "Scarborough Fair/Canticle", which combined the English folk ballad "Scarborough Fair" with an anti-war poem sung in counterpoint. Later, their fame took an ever bigger boost when their music was used in the film The Graduate, which not only included their older songs (which was rare at that time for film) but also new material like "Mrs. Robinson".

The duo split up following the release of their album Bridge Over Troubled Water in 1970. Simon went on to experience a Breakup Breakout and a successful solo career, while Garfunkel is still best known for his efforts with the duo, although he's also known for singing the Theme Song of Watership Down and for his acting roles in such films as Catch-22, Carnal Knowledge, and Bad Timing. (Simon also tried his hand at acting, appearing in Annie Hall and One-Trick Pony.) They have reunited (and broken up again) several times over the years. Most famously, they came together for a 1981 free concert in Central Park, which drew a crowd of over half a million.

They were inducted into the Rock & Roll Hall of Fame in 1990 (Simon was enshrined separately as a solo act in 2001) and have won several Grammy Awards.

Sean Connery: I Garfunkel'd your mother!