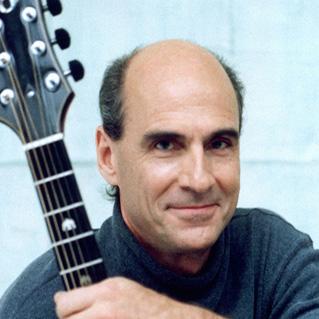 He's seen fire, and he's seen rain.
Influences:
I've seen fire and I've seen rain, I've seen sunny days that I thought would never end.
I've seen lonely times when I could not find a friend, but I always thought that I'd see you again.
"Fire and Rain"
Advertisement:

James Vernon Taylor (born March 12, 1948) is an American Singer-Songwriter and guitarist distinguished by his uniquely sweet-sounding voice, and pleasant folk-rock tunes. The second eldest of five children, most of whom are singers, he spent most of his life in both his native Boston, Massachusetts; as well as Chapel Hill, North Carolina.

His eponymous first record for Apple Records (1968) did not do well; he subsequently signed onto Warner (Bros.) Records and released the album Sweet Baby James, which spanned the hit singles "Fire And Rain" and "Country Road" and was significantly more successful than his previous album. He followed it up with Mud Slide Slim And The Blue Horizon in 1971, which was another success, producing the hit cover of Carole King's "You've Got A Friend", and ushered in a more R&B oriented sound which he maintained well into the 70's. Around this time, Taylor starred in the critically acclaimed film Two-Lane Blacktop alongside Dennis Wilson. His next record, One Man Dog, was nearly two years in the making and was ultimately a severe letdown; made up of 18 brief pieces, it failed to reach the success of his previous two records. Walking Man followed in 1974 and did little to change his career. In 1975, he released Gorilla, an album drastically Lighter and Softer than his previous materials but which returned him to the success he'd enjoyed earlier in the decade, largely due to the Silly Love Song hit "How Sweet It Is (To Be Loved By You)", which featured backing vocals by Carly Simon, his wife at the time. In the Pocket, the sequel to Gorilla, followed in 1976, in addition to a Greatest Hits Album that became the best selling record of his career.

In 1977, Taylor released his first album on Columbia Records, JT, which spawned the hit "Your Smiling Face" and was a success. This was followed by a rather long period during which Taylor was rather unsuccessful. He was prone to alcoholism and drug abuse. He ended up divorcing Carly Simon in 1983; the title of his 1981 album Dad Loves His Work came, in fact, from the response Taylor gave to an ultimatum Simon had given him if he wanted their marriage to continue. Two years later, he married actress Kathryn Walker. Although Walker helped him overcome his heroin struggles, they eventually divorced in 1996. In 2001, Taylor married Caroline "Kim" Hessberg, who was the Boston Symphony Orchestra's longtime former director of public relations and marketing. Interestingly enough, she was once married to the late trumpeter Rolf Smedvig, who also played in the BSO and was one of the founding members of the Empire Brass Quintet. Taylor has also performed with the BSO's sister orchestra, the Boston Pops Orchestra.

His children, Ben and Sally Taylor, are also active singers.