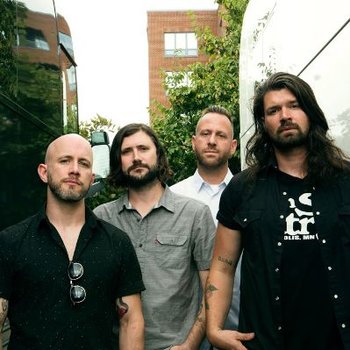 "The truth is you could slit my throat
And with my one last gasping breath
I'd apologize for bleeding on your shirt"
—"You're So Last Summer"
Advertisement:

Taking Back Sunday (or TBS for short) is a Post-Hardcore/Emo/Alternative Rock band from Long Island, NY. They are most famous for their intense, confessional lyrics, their use of complex vocal lines with multiple vocalists, and their frequent lineup changes.

Guitarist Eddie Reyes, who was already a veteran of the Long Island punk scene, formed the band in 1999 with vocalist Antonio Longo, bassist Jesse Lacey (who later went on to form Brand New), drummer Stephen DeJoseph, and guitarist/singer John Nolan. After releasing a fairly obscure EP and several lineup changes, the band replaced Longo with Adam Lazarra, Lacey with Shaun Cooper and DeJoseph with Mark O'Connell (the latter two changes occuring during recording of the EP, leading to two different lineups performing on the EP). With this lineup, the band released Tell All Your Friends, a hugely influential slice of post-hardcore that spawned four singles and was a critical darling.

But this lineup was too good to last, as John and Shaun both left the band in 2004 to form the indie rock band Straylight Run. They were replaced by Fred Mascherino and Matt Rubano, respectively. This lineup recorded two albums together: Where You Want to Be in 2004 and Louder Now in 2006, which both helped propel the band into the mainstream. However, conflicts between Fred and the rest of the band forced the band to change lineups again, as Fred was replaced by Matthew Fazzi. They recorded New Again in 2009, but it received middling reviews and the band now considers it to be their weakest album.

Seemingly spent creatively, Taking Back Sunday decided to go back to their roots in a big way: they reunited the Tell All Your Friends lineup, bringing John Nolan and Shaun Cooper back to the fray in 2010. They recorded their fifth and Self-Titled Album in 2011, which expanded the band's songwriting while still keeping their signature sound. The band managed to keep this lineup until 2018, and releasing another two albums with this lineup, Happiness Is in 2014 and Tidal Wave in 2016. The lineup came to an end with Reyes' departure in 2018. He was not replaced.

Taking Back Sunday contains examples of: