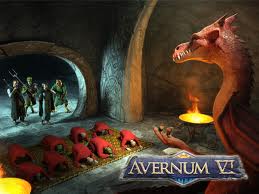 "Oh, swell. She only summoned a demon lord into the tower once. She's only mildly insane. What a wonderful idea! Let's proceed at once!"
— Conrac
Advertisement:

Avernum is a series of computer Role Playing Games by Spiderweb Software. There are currently six parts in the series, as well as Blades of Avernum, which doesn't directly influence the plot. The first three games, and Blades of Avernum, are actually remakes of the Exile series of games. The fourth, fifth and sixth, however, are completely new games, with a completely new engine.

The games follow the adventures of several groups of, well, adventurers. In the first, they are just a bunch of misfits cast down into the depths of Avernum, which is the name for a humongous series of caverns... and the only place the Empire does not rule, instead casting down its undesirables into it via a one-way magical portal. In the second game, the heroes are a band of soldiers in the Avernum army, accidentally getting a big role in the war against the Empire and diplomacy with an alien people. In Avernum 3, the protagonists are the "secondary" team sent to the surface, after the first group disappeared without a trace. Avernum 4 features another band trying to discover the source of numerous problems (mostly of the monstrous variety) which have sprung up after a period of peace. Avernum 5 puts you in the shoes of soldiers from the Empire, now at peace with Avernum, trying to hunt down a particularly nasty rebel who wishes to end that peace. The final game in the series, Avernum 6, casts you as Avernite soldiers desperately trying to stem the chaos of an Avernum overcome by both a Slithzerikai invasion and the Blight, a disease destroying Avernum's food supply.

Blades of Avernum happens after Avernum 3 and doesn't follow the exploits of Avernites per se. In fact, it does not have any cohesive, overarching plot at all. Instead, it lets you create your own scenarios and play the ones other people have made. It has been all but abandoned by Spiderweb Software. However, there is still a community of designers for it and dozens of scenarios have been produced.

Avernum was rewritten again, starting with Avernum: Escape From The Pit. The main reason behind this is that the first series (Avernum 1, 2, 3) doesn't run well or at all on modern OSes (especially macOS X 10.6 or above), and the programmer wanted to use a better looking engine. As well as porting the game to the iPad. Avernum 2: Crystal Souls was released for the same three systems, with Avernum 3: Ruined World being released in 2018.