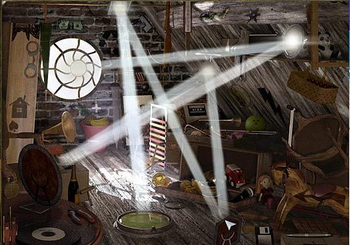 Simply put, this puzzle involves a room that contains a light source and a number of mirrors, and requires the player to position the mirrors in a way so that the light will bounce off them in succession and hit a target. May also happen with a laser or magic beam, or something else entirely. Additional complications can include the beam killing the player if they touch it, so the player may also need to ensure that they have safe passage through it.

The basic idea of this trope was tested by the Mythbusters, albeit in the "used to light a room" sense. While it does provide some light for the room, it isn't something that can be relied upon for being able to see through the dark. Without a stable light source, you'd have to constantly readjust the mirrors due to the changing positions of the sun. While with a stable light source it is possible to rebound the light off of several mirror, it quickly starts to weaken to the point of being unnoticeable the further it goes, requiring the mirrors be almost right up next to each other. So, while it is technically possible, it's highly improbable.

This is cousin to the Block Puzzle, and may sometimes be That One Puzzle. Compare Reflecting Laser and Sundial Waypoint.

There are no mirrors in this one but the Buzzy Beetle statues have a similar effect.

There are no mirrors in this one but the Buzzy Beetle statues have a similar effect.