Video Game / The Bizarre Adventures of Woodruff and the Schnibble 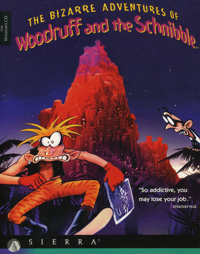 The Bizarre Adventures of Woodruff and the Schnibble (European title Woodruff and the Schnibble of Azimuth) is a 1994 French adventure game developed by Coktel Vision. The game was created and written by artist Pierre Gilhodes, the creator of the Gobliiins series, of which Woodruff shares its visual style, gameplay and offbeat humor, though is not an official part of the Gobliiins series or canon. Woodruff was distributed in North America in 1995 by Sierra.
Advertisement:

The game begins where a great city has since devolved into a nightmarish dystopia, ruled by a bureaucratic and totalitarian government. Heading the government is The President, accompanied by his corrupt and maniacal advisor the BigWig, who enacts excessive taxation (including taxes on breathing and walking) and fear-based propaganda upon the city citizens, including a peculiar warning about a nocturnal beast who feeds upon those who oppose their government's regulations. In the lower levels of the city, relations between humans and Bouzouks have grown to their most tense, giving rise to a group known as the Bouzouk Freedom Party, a terrorist organization who, being natural pacifists, have yet to commit any actual acts of terrorism.

Professor Azimuth, an eminent political and scientific human personality known for his work on manipulating the aging process of cells, sympathizes with the plight of the Bouzouks and becomes determined to help end their oppression. In his research, he discovers the legend of the Schnibble, a mystical entity that is believed to have the ability to cause peace and prosperity to flourish, and begins work on finding a way to unleash it. Word spreads about his work, and Azimuth is hailed as a hero by the Bouzouk community. Unfortunately, word of the Schnibble also reaches the ears of the BigWig. To stave off any chance of a revolution, the BigWig and his thugs storm the home of Azimuth and his young, adopted half-human, half-Bouzouk son, Woodruff.

Professor Azimuth barely has time to hide Woodruff before the BigWig breaks into their house, kidnapping the professor and ruthlessly gunning down Woodruff's beloved teddy bear in the process, but not before befitting him with a Viblefrotzer, an invention of his own design that can speed up the aging process (and looks eerily similar to a Sony Walkman). Within seconds, Woodruff ages about fifteen years, finding himself now prepared for an epic quest: rescue his adopted father, avenge the death of his teddy bear by extracting revenge on the evil BigWig and find a way to unleash the Schnibble and bring peace back to the city.

Alternative Title(s): Woodruff And The Schnibble Of Azimuth