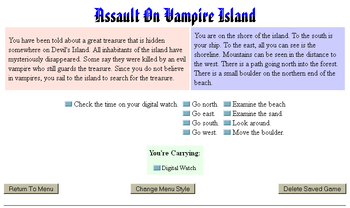 When you land on Vampire Island, you know nothing about it, other than it allegedly contains a lost treasure. Then you receive this note:

"I know who you are, and I know what you are doing here, but you will NEVER succeed in your quest! Begone! You cannot trace me! You cannot find me! You have no idea who I am! Sincerely, Dracula, Lord of the Undead, Upper Turret of the Creepy Castle."

...which is a pretty good indication that your upcoming adventure is not entirely serious. And though you end up killing a whole series of movie-style monsters using puzzles, the whole thing remains either tongue-in-cheek or flat-out giggily.

The game's hosted on Rinkworks

as part of Adventure Games Live.