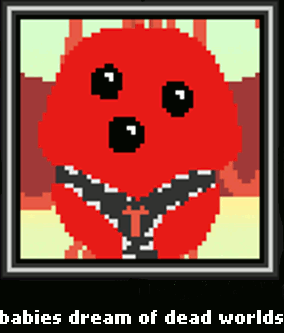 "Look at him, darling, he's dreaming."
"But he's just a baby. What does he have to dream about?"
"Being in the womb? He won't remember the dreams when he grows up."
"They have no memory yet. They don't know what this world is."
"I wonder what we dreamed of when we were babies?"
— opening dialogue
Advertisement:

Babies Dream of Dead Worlds is a 2010 indie Adobe Flash game made by Gregory Weir.

The game is designed in an 8-bit style. In each Metroidvania-style segment you play as a member of a winged Starfish Aliens species that resembles a small rodent with butterfly wings. There are three major characters: Fuzor, a young racer, Mell, a researcher, and Naaij, an archaeologist, coloured blue, red and yellow respectively and their daily lives on their unnamed home planet...or home dimension. Throughout the game you can interact with computers, talk to other Starfish Aliens, beat a time trial, and even engage in a collect-a-thon.

"What does any of that have to do with babies?" you ask. Well, as you play, the main menu fills with human babies (who are in fact the only humans we see in the entire game). The implication is that these are human infants who are dreaming about an alien civilisation. As the game progresses you get a snapshot of life in this world, however, things are much deeper than they initially appear.

The game seems to be focused more on telling a story than on gameplay, though its gameplay is somewhat unique, utilising slippery but responsive gravity controls to simulate flight.

The game is very short (playing it all the way through will not take much more than fifteen minutes), and much of its replay value comes from replaying segments to collect items/get better times. There is no punishment for not getting the "best" ending to any level.

Being as the game is very short, spoilers will be left unmarked. Go and play the game before reading on. The game is hosted on Newgrounds here