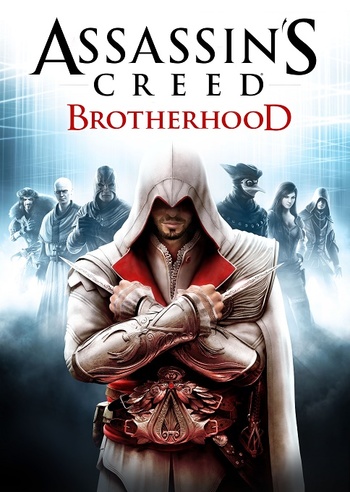 "The liberation of Roma has begun!"
Advertisement:

The game opens in 1499 immediately after the end of Assassin's Creed II, and centers around Ezio Auditore's continuing conflict against the power-hungry and Templar-aligned Borgia family in Rome at the time of the early Italian Wars, and his efforts to restore the local Assassin Brotherhood to its former glory. And back in 2012, Desmond and the other Assassins continue their search for the Apple of Eden that Ezio left behind.

Gameplay improvements include a more robust fighting system that allows chaining instant kills together if you don't miss or take damage, riding horses inside the city, and control of larger weapons such as cannons. In addition, multiplayer has been added to the roster for the first time in the franchise's history, with the "plot" being Templars in training at Abstergo to think and work like Assassins, thereby introducing the fact that Abstergo managed to have ancestral memories visited by other people than said memories' owner's descendants in the metaplot. Brotherhood featured two story-DLC: a (formerly PS3 exclusive) one titled The Copernicus Conspiracy, and another (general-release) titled The Da Vinci Disappearance.

Ubisoft got very involved with the fandom for Brotherhood, hosting videos on a YouTube channel

Ezio's Brotherhood self crossed over to another series as a Guest Fighter in Soulcalibur V. He, along with Cesare Borgia, was also a boss in a temporary crossover event with For Honor in December 2018/January 2019.

The game, alongside Assassin's Creed II and Revelations, were re-relased in November 2016 for 8th generation consoles as part of the "Ezio Collection". In February 2022, this trilogy-compilation was released on the Nintendo Switch.