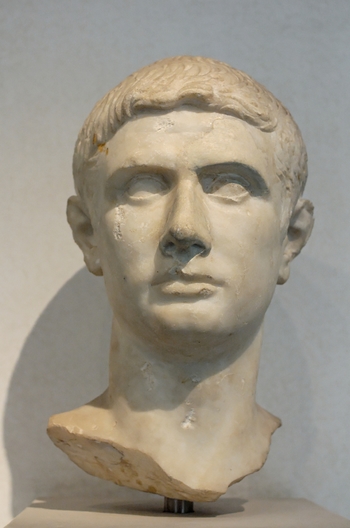 Et tu?
Two thousand years after the assassination of Julius Caesar, people are still debating whether or not that was an honorable act. Dante put Brutus and Cassius in the lowest level of hell for what they did, right next to Judas Iscariot, but Shakespeare wrote that Brutus was "the noblest Roman of them all."
— George R. R. Martin
Advertisement:

Marcus Junius Brutus the Younger (85 BC – 23 October 42 BC) is without a question the most famous of all assassins in recorded history. He was a senator of The Roman Republic of the most illustrious stock, with his name being one of the oldest patrician families, tracing itself back to the very founding of the Republic, to Lucius Brutus himself.

Officially he was the son of Marcus Junius Brutus the Elder and Servilia. His mother Servilia was half-sister to Cato the Younger, whose daughter Portia, Brutus Younger would eventually marry. Servilia was also the mistress of Julius Caesar, and Roman historians such as Plutarch speculated that Brutus might have been Caesar's biological child (but historians insist that since Caesar would have to have been fifteen when Brutus was born, and it's unlikely that his relationship with Servilia began then).

Brutus' father was a Marian, a tribune of the plebs, and a populare, who opposed the dictator Sulla Felix and his associates Pompey the Great and Marcus Licinius Crassus. His father actually held his own against Pompey before surrendering honorably, only for Pompey to then order his execution without trial. The child of a disgraced rebel, Brutus was then adopted by his uncle Quintus Servilius Caepio (and for a time was known as Quintus Servilius Caepio Brutus because why not) and he eventually found a mentor in his other uncle Cato the Younger. In his early years, he made a fortune as a money lender in the Roman colony of Cyprus, and later in Cilicia where Cicero was a governor. In his letters, Cicero remarked that Brutus was renowned for making a huge profit as a loan shark, charging exorbitant interests to poor customers and then dispatching goons to collect. As a senator, Brutus was an optimate (where his father was a populare) and aligned with the conservative faction of the Senate. He supported his uncle Cato the Younger, the principled statesman, against the First Triumvirate, despite being personally friendly with Caesar.

Not much is known about Brutus in the period before the outbreak of the Civil War between Pompey and Caesar. When war broke out, Cato turned Pompey to defend the Republic against Caesar who was branded an "enemy of the state". As such Brutus found himself fighting in the army of the same man who killed his father. At the Battle of Pharsalia, Caesar gave explicit orders to spare Brutus, and upon defeat famously pardoned Brutus, making him governor of Gaul and later making him urban praetor during his dictatorship. Cato the Younger meanwhile committed suicide in exile, and Pompey died in Egypt. In Caesar's five year dictatorship, he spent only a few months in Rome, during which time Brutus divorced his first wife, Claudia Pulchra and married Cato's daughter Portia, which was scandalous in its time, because they chose to Marry for Love. No one is sure if Brutus actually masterminded Caesar's assassination or was eventually coerced into it but in either case, on the fateful day of the Ides of March, Brutus numbered himself among the Assassins who fatally stabbed Caesar in the Theatre of Pompey, which was used as a Senate House. Plutarch records that when Caesar saw Brutus among his assassinations he blurted out "Kai su, teknon?" in Greek ("You too, my son").

After assassinating Caesar, Brutus and Cassius emerged as leaders of a faction, self-styled "liberatores" who claimed to have restored the Roman Republic and delivered it from a tyrant who grasped for monarchy. Politically this was a huge can of worms, since Caesar as dictator perpetuo, a title granted to him by the Senate, had given many of his assassins governorships, titles, and other freebies that the Assassins still wanted to keep hold of after killing him. Caesar was also immensely popular among the people, and "The Liberatores" underestimated the extent to which their version of their actions would be seen differently by other Romans. In the immediate aftermath, the Assassins left the Roman Forum and marched to Capitoline Hill barricading themselves from the angry mob, and eventually they abandoned Rome itself for the provinces. In time, after a brief period of peace during which Caesar's grandnephew and adopted son Octavianus (the future Augustus Caesar), avoiding Sulla's proscriptions, tried to bridge factions, a second Civil War broke out between the Second Triumvirate and the Liberators. Said war ended at the Battle of Philipi, where upon realizing the battle was lost, Brutus committed suicide, by running into a sword. Mark Antony, the commander of the enemy's forces wrapped Brutus' body in his own purple mantle and gave him a honorable burial.

Historians and artists will likely never stop debating Caesar and his assassination. Whether Caesar was truly trying to be a king, or if he was, whether assassinating him in the manner they did was truly the best or only way to effectively stop him. At the time of his assassination, Caesar was en route for an invasion to the Parthian Empire to avenge Crassus' death and defeat at the Battle of Carrhae, and the urgency of the assassination was driven in fears of another Caesarian conquest and triumph which would make his reputation and clout unshakable. The manner in which the event took place (extremely clumsy, with senators tripping over each other as they assassinated Caesar), and the poor planning and initiative on display after the event, shows that the conspirators were likely not clear on how to proceed from said situation.

From the age of the Enlightenment onwards, Brutus has been seen positively, and often invoked as a brave republican, with his assassination glorified as a Tyrannicide (leading to the apocryphal phrase "Sic Semper Tyrannis" attributed to him, but which has never been traced to any ancient source). His assassination inspired many other copy-cat attempts, of which the most famous is John Wilkes Booth killing of Abraham Lincoln. Booth as an actor had played Brutus many times over, and he saw Lincoln as a dangerous reformer and tyrant in the manner many of Caesar's assassins did, and much like his inspiration, was surprised by how his assassination was immediately condemned by the people of his nation as a great crime.