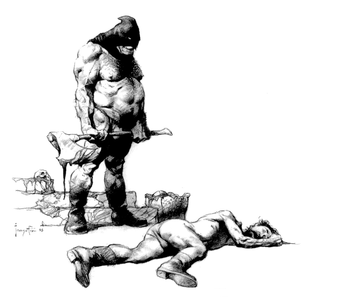 Don't get a-head of yourself.
"When I was young, every great king had an executioner. Not just to execute people, but also to execute their vision. ... But mainly to execute people."
— Hela, Thor: Ragnarok
Advertisement:

An executioner is someone tasked with executing criminals sentenced to death by an official authority. In some cases this person could also execute other corporal sentences such as whipping or chopping off limbs.

In the beginning, justice was based around private justice, i.e. feuds and vendettas: as such the victim or his relatives had to execute their sentence themselves. Oftentimes it was the community who executed the sentence, and some sentences, such as stoning, were based around this concept.

Growing centralization made justice an exclusive prerogative of the state, and the execution of sentences became a public monopoly. First functioning by hiring hourlies, this position became later a permanent one.

Of course, several subtypes could fit for each example.

If the executioner also carries out the task of judging the culprit personally, this is Judge, Jury, and Executioner. If he acts without legal sanction then he's a Vigilante Man doing Vigilante Executions. Executioners will also overlap with Torture Technician and Exalted Torturer, as in medieval Europe, executioners also dealt with torture. Although historical executioners rarely wore hoods, depictions may show them as Malevolent Masked Men. Will most likely wield an axe.