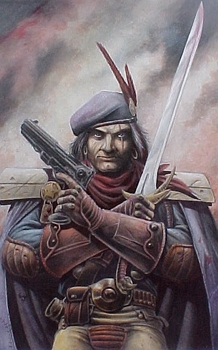 Time to buckle some swash...
I first produced my pistol, and then produced my rapier,
Said 'stand and deliver', for he was a bold deceiver.
— The Dubliners, "Whisky in the Jar"
Advertisement:

The child of Guns Akimbo and Dual Wielding — a character simultaneously wielding a gun in one hand and a sword in another, or another combination of projectile and melee weapon. This would generally be impractical, as you might want that other hand free to help you steady or something, but it is much, much easier to handle a weapon with one hand in fiction. Thank the Rule of Cool for that one.

The Sword and Gun combo is strongly favored by pirates, traditional or otherwise, and highwaymen. As such, it's a classic for any sort of swashbuckling type. With piratical characters, the trope is actually somewhat accurate. Many pirates in real life would carry a pistol in one hand and a cutlass in the other. When their opponent attacked with his sword, the pirate would block the slash, put his pistol in the enemy's stomach, and shoot him. Nowadays the pirates carry AK-47s and machetes, but the effect is the same.

The sword and gun combo was also considered the preferred combination for cavalry. There is even a specific kind of pistol holster called a Cavalry Holster that is worn to facilitate an easy cross draw for your off hand. The saber was considered the primary weapon and the pistol a secondary. The general idea was the pistol allowed the cavalryman to engage threats beyond the reach of their saber.

Often justified in historical settings, since old-fashioned pistols were almost entirely single-shot and inaccurate enough to make it essentially pointless to use both hands. Once you'd "had your shot", a single-shot pistol became nothing more than an elaborate club or a tool for parrying blades, until you got the thirty-plus second respite required to reload. Early cap-and-ball revolvers increased the number of shots, but still took long enough to reload that carrying a blade could be useful. This is often seen with the Samurai Cowboy. Folk who could afford it would often carry extra guns to increase their firepower.

Replace this with a rifle and a spear, then mash them together for handling purposes, and you have the concept behind the bayonet.

A modern version of this trope has the wielder carrying a gun in one hand and a knife in the other. To some extent, this is actually Truth in Television, as soldiers are still issued knives or machetes for use as tools or emergency weapons. Many special forces units are well-versed in the use of knives for close-quarters combat, with some techniques advocating the use of both in tandem with each other. The difference is that hardly any warfighter today wears a full-length sword, since they're harder to draw or wield in close quarters, lack a knife's Mundane Utility, and are too inconvenient to wear considering how rarely they would be used.

For guns that shoot swords, see Abnormal Ammo. For weapons that are both a sword and a gun at the same time (such as gunblades from the Final Fantasy series), see Mix-and-Match Weapon.

Compare Bow and Sword, in Accord, which substitutes guns for a different kind of projectile weapon and doesn't necessarily use them simultaneously, Sword and Fist, where the character punches and kicks you instead of shooting in-between armed attacks, and Gun Fu, where the character punches and kicks you in-between shooting attacks. Like other fighting styles with multiple weapons, this may be a manifestation of Heroic Ambidexterity.

Not to be confused with the show GUN×SWORD, or The Musketeer (a person proficient in both sword and gun, but who doesn't generally dual-wield them).