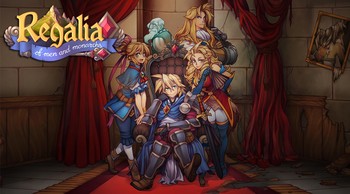 Kay, his sisters, his bodyguard, and his grandfather's ghost, in Ascalia's remains.
A king is nothing without his subjects. Any fool may claim a pile of rubble, but without people, you're just an empty title. Or a tyrant. [...] One cannot rule in a vacuum. You need to be a person. Their person - not just a face on the throne. You may obtain riches and inherit lands, but in the end, true wealth lies in the hearts and minds of your people. You are only as powerful as the respect you command.
— Desideratus, on leadership
Advertisement:

The city of Ascalia was once the crown jewel of the Rashytil Expanse, led honorably by the great House Loren. However, no kingdom lasts forever, and Ascalia was reduced to a smoldering ruin during the Crusades. Kay, the only surviving son of the realm's last king, inherits what's left. When Kay, his loyal bodyguard Griffith, and his sisters Elaine and Gwendolyn go to investigate, they learn a terrible secret: Ascalia was secretly drowning in debt well before the Crusades destroyed everything, and now the debt collector is calling to receive his due.

Kay is very unenthusiastic about the situation he's been thrust in, and starts to panic when the collection agency backs him into a corner with an offer he has no choice but to accept...

Despite the debt and the war, the Loren name still holds some weight around Rashytil. In lieu of money, the collectors want Kay's party to rebuild Ascalia from the ground up, attract people to the town and restore it to its former glory. Succeed, and Kay will be a hero and the Loren family's reputation will be preserved. Fail, and House Loren dies in obscurity.

Regalia: Of Men and Monarchs is a Turn-Based Strategy Role-Playing Game developed by Polish indie game studio Pixelated Milk. The PC version was released in 2017 by Klabater following a successful Kickstarter campaign, and was ported to consoles (PlayStation 4, Xbox One, and Nintendo Switch) a year later by Crunching Koalas as Regalia: Of Men and Monarchs: Royal Edition, which included the two DLC packs, "The Unending Grimoire" and "Paragons & Pajamas", which introduced new characters to recruit and areas to explore.

Tropes used in Regalia: Of Men and Monarchs: