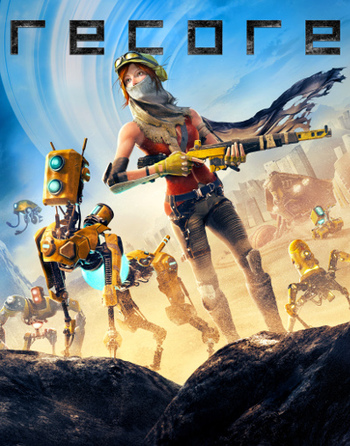 ReCore is an action-adventure platforming third-person video game by Comcept and Armature Studios, and directed by Keiji Inafune of Mega Man fame. It was released on September 13, 2016.

Set After the End Earth has been ravaged by a deadly disease, called the "Dust Devil". Humanities only chance of survival is to abandon Earth and set course to a barely inhabitable world dubbed Far Eden. While humanity as a whole lies in cryogenic status above their new home's atmosphere, a few scientists and engineers take "shifts" ensuring an autonomous collective of AI terraform Far Eden to make it a safe place for humanity to rebuild.

Predictably, something goes awry. You play as Joule Adams an engineer down of the surface that awakens long after she was due her shift and with a large portion of the robots on the planet now hostile to human life. Seemingly alone on the planet Far Eden; Joule must uncover what went wrong, fix the ailing terraforming machinery and attempt to make contact with the remains of humanity. To survive she must forge friendships with a courageous group of human-loyal Corebot companions, each with unique abilities and powers.

Tropes found in this videogame: