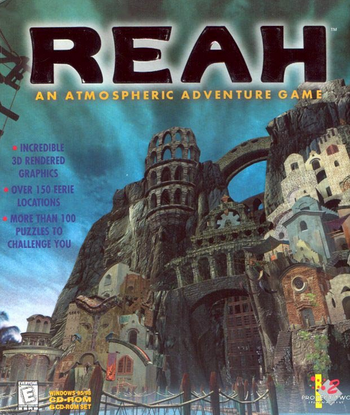 Reah: Face the Unknown is a first-person prerendered adventure game, one of the first games developed by Detalion and LK Avalon, released in 1998. Having fallen out of print for years and its only known CD and DVD copies having been released in Polish with audio-only English dubs, Reah is now available on GOG.com

Journalists have been flocking to the planet Reah to discover how, despite its lack of resources and inhospitable climate, a massive top secret base had been established there. You are the last and most persistent of them, and the base's commander finally revealed that it was all part of a research mission surrounding a teleportation gateway. It connected with an alternate version of Reah in another dimension, one inhabited by strange humanoid beings, and full of bizarre technology and structures. Because this dimension somehow prohibited advanced human technology from working, a small outpost for the research team was set up on the other side, where they could observe the inhabitants first-hand. Now the commander has allowed you to see this version of Reah for yourself. Despite the return connection becoming increasingly unstable, your desire to be famous didn't let this deter you. With the return portal gone, now you simply must face the unknown.