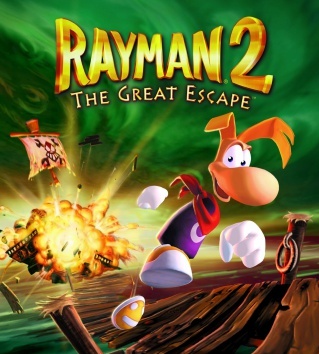 "Rayman, look what the pirates have done to our world... a planet of anguish and pain, haunted by evil. A dark place, teeming with fierce monsters. Nothing can stop them now that they've captured you. They've taken everything and reduced our people to slaves. The robots search for innocent prey. In the chaos, they exploded the heart of the world. The 1000 lums of energy which form it have been scattered. We are getting weak. Soon, it will be too late... You must escape, Rayman, you are our only hope!"
Advertisement:
"Wake up Rayman, I have sent you help..."
— Ly the Fairy, in a telepathic message to Rayman, in the intro

Rayman 2: The Great Escape, originally released in 1999, is the first 3D title in the Rayman franchise, bringing with it a fully 3D world, a wide variety of skills that the player character could utilize, and a much more fleshed-out and consistent backstory, to the point of (until the Arc Welding sequel Rayman Origins 12 years later) essentially being set in an Alternate Continuity from the first game altogether and setting the stage for the rest of the series to build upon.

The story begins when Rayman's homeworld, the Glade of Dreams, is suddenly invaded by an evil armada of Robo-Pirates from space, kidnapping the world's inhabitants en masse and using them as slave labor – including Rayman himself, who has lost all his strength after the Pirates destroyed the Heart of the World, shattering it into a thousand pieces. All hope is not lost, though, as Rayman's froglike friend Globox winds up captured too, smuggling a Silver Lum into his and Rayman's cell aboard the Pirates' prison ship, giving the two a chance to escape. Now Rayman is the Glade's inhabitants' only hope for defeating the Robo-Pirates, but he'll have to regain all his strength first – and to do that, he'll have to find the four magic masks that will awaken Polokus, a magic being who dreamt the Glade into existence.

Rayman 2 is also particularly infamous for having been ported to countless platforms following its release: the game was originally released on the Nintendo 64, and since then has seen versions on PCnote Two PC versions even, because Technology Marches On — the original 1999 release doesn't work very well or flat out doesn't work on 64-bit OSes; an issue that is the main fixing point of the 2011 digital rerelease by Good Old Games, PlayStation, Game Boy Color, Dreamcast, PlayStation 2, Nintendo DS, Apple iOS and Nintendo 3DS, each version bringing at least some new features with them. Out of all these ports, the most comprehensive is the PS2 version, retitled Rayman Revolution (Rayman 2: Revolution in North America) and featuring a whole new hub-world to explore, along with a graphical update and a slew of new minigames.

The game was followed by Rayman 3: Hoodlum Havoc.

Rayman 2 (and any port or re-release thereof) contains examples of: